James Buescher Pulls Off The Upset To Win The DRIVE4COPD 300 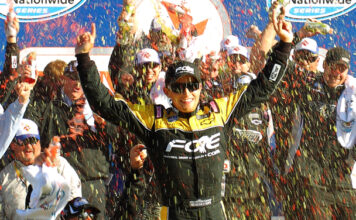 [/media-credit]DAYTONA BEACH, Fla. – Running in 11th place entering Turn 4 on the final lap, James Buescher was able to maneuver through a multi-car accident and come away with his first NASCAR Nationwide Series win in a green-white-checkered finish in the 54th annual DRIVE4COPD 300 at Daytona International Speedway.

“It’s hard to put into words,” Buescher said of the win. “They all piled up in front of me and we made it through. It’s hard to describe the feeling when you make it through the wreck and you’re the only guy – you don’t see anyone in front of you and you’re coming to the checkered flag. It’s pretty incredible and I’ll definitely never forget it.”

Buescher, who is driving for Turner Motorsports in both the Nationwide and Camping World Truck series this season, led 10 laps before finishing 17th in Friday night’s NextEra Energy Resources 250. He now has two wins at the “World Center of Racing” with the previous triumph coming in the 2009 ARCA season opener.

“I can’t think of another race track that I would rather this (win) be at,” Buescher said. “Daytona is historical – everybody knows that – and every driver dreams of winning here. My goal as a young driver was to be able to race at Daytona in NASCAR and I’ve done that several times, but now I’ve finally won here. I don’t know how to put it into words.”

The win was an emotional one for Buescher’s crew chief Trent Owens.

“This is my first win as a crew chief in Daytona,” Owens said. “It’s bigger than life for me. I don’t think I’ve missed a July Daytona race since I was eight years old or so. This was a really big deal for me.”

There were a record 38 lead changes by a record 16 different drivers (previous records were 35 and 12, respectively) and Chevrolet has now won the series season-opener 22 times in the last 26 races.

Pole-sitter Danica Patrick led the first two laps, but her No. 7 GoDaddy.com Chevrolet sustained damage in an incident while drafting with teammate Cole Whitt on Lap 50 of the 120-lap race. She finished 38th.

Fourteen drivers in today’s race are pulling double duty this weekend and will be competing in Sunday’s Daytona 500. Brad Keselowski, who is the only driver who will be participating in all three NASCAR sanctioned events during Speedweeks 2012, finished second and Elliott Sadler rounded out the top three.

Tickets for the 54th annual Daytona 500 on Sunday, Feb. 26 can be purchased online at www.daytonainternationalspeedway.com or by calling 1-800-PITSHOP.

Fans can stay connected with Daytona International Speedway on Facebook ( www.facebook.com/DaytonaInternationalSpeedway) and Twitter ( www.twitter.com/disupdates) and fans can also follow NASCAR (@NASCAR) and hashtags #NASCAR and #DAYTONA500.