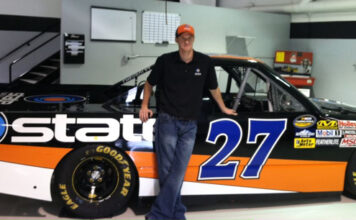 [/media-credit]As the son of Daytona 500 winner Ward Burton and nephew of NASCAR Cup driver Jeff Burton, the teenager Jeb Burton most certainly bears that famous last name. But in spite of that, the young up and coming racer says he is “just a regular guy.”

“I have a full-time job at a transmission shop,” Burton said. “It’s 30 hours a week but it’s still a pretty good job.”

“I work like most everybody does, getting up and going to it every Monday morning and being stressed just like they are.”

Burton also says he is pretty much of a ‘regular guy’ when it comes to his hobbies and what he likes to do when he is away from the hustle and bustle of the transmission shop.

“I like to hunt and fish and go to the lake,” Burton said. “That’s what I do when I’m not working.”

This weekend, however, the young man will be trading in his ‘regular guy’ status to follow in the footsteps of his famous racing family names.

In fact, Jeb Burton will be making his NASCAR Camping World Truck Series debut, piloting the No. 27 State Water Heaters Chevrolet for Hillman Racing, in the Kroger 250 at Martinsville Speedway on March 31st.

“I’m really excited,” Burton said. “I just want to go out there and keep my nose clean at Martinsville and hopefully come out with a top ten finish.”

“I don’t want to tear anything up so I don’t cost us any money,” Burton continued. “And I want to finish top-10 or top-12 every race and not tear things up.”

“Anything can happen when you don’t tear stuff up and run well.”

In this instance, Burton’s famous last name definitely helped in putting his Truck racing deal together. After much investigation, Jeb and his father settled on a deal to race for Mike Hillman with veteran crew chief Trip Bruce and State Water Heaters on the hood of the race truck.

“My dad went down to Charlotte to look at ARCA teams and some K&N East teams and realized that it didn’t cost much more to run trucks,” Burton said. “So, we went after our sponsor State Water Heaters. They’ve been helping Dad for the last couple of years and they seem really interested.”

“We got with Mike Hillman and he was parting with Bob Germain and had a bunch of good equipment and thought it would be good for us to come with him,” Burton continued. “I started working with him, worked with him for a few days, and we’re all communicating well.”

Burton is also communicating well with Trip Bruce, probably one of the most important member of the team as the youngster’s new crew chief. Burton is also looking forward to Bruce’s sharing his veteran knowledge of the sport, having crew chiefed for other drivers such as Johnny Benson and Kasey Kahne.

“Me and Trip get along good,” Burton said. “We’ve only been to the race track twice together so we probably need to get a little better with that.”

“It just takes time for him to find out what I want in the car and the adjustments he needs to make to make me go fast,” Burton continued. “I think me and Trip will work well together.”

In spite of his ‘regular guy’ status, has the young driver learned any lessons from the other famous race car drivers with the same last name? Or does having that famous name sometimes become more of a hindrance than a help?

“Dad gives me his input and help,” Burton said. “But me and Dad don’t see eye to eye on some things sometimes. So, he kind of stays out of it.”

“I watch the races every Sunday and I see not only what my uncle does but what other people are doing, making mistakes and what they’re doing that is good,” Burton continued. “I just try to soak all that in.”

“I’m sure Jeff and my Dad will talk to me a lot this week,” Burton continued. “I know they’re both probably excited about it for me.”

Burton acknowledged that he has another mentor, to whom he often turns on and off the track. And this mentor will be in his ear for his Martinsville Truck debut.

“I’ve got a good buddy who is my crew chief in my late model car and me and him get along great,” Burton said. “There is good chemistry there.”

“He’s probably going to spot for me because he’s my spotter in my late model car,” Burton continued. “He keeps me calm on the radio.”

“He believes in me and I believe in him,” Burton said. “When you have somebody that’s spotting for you and you don’t know him well, they make think you’re just not driving well. He knows I’m driving the wheels off it.”

“That’s another reason I like him so much,” Burton continued. “He knows I can get it done and he believes in me.”

“That’s a big part of this sport.”

Burton also acknowledged that his late model racing experience will serve him well as he prepares for his Truck Series debut.

“Definitely late models have prepared me best for Trucks,” Burton said. “I tried ARCA and ran one race and on the first lap I got wrecked going down the back straightaway. That wasn’t a very good race.”

“The late models have definitely trained me,” Burton continued. “It’s a tough division to run in and win races. There’s a lot of good drivers.”

Burton will most certainly be experiencing plenty of good drivers as he kicks off his Truck season with his new team at a track that is right in his back yard. In spite of that, however, the young driver is not claiming any home field advantage.

“I think every race is a home race because it’s on national television,” Burton said. “I’m not going to think about that kind of pressure.”

“I just need to work on getting the truck handling right and then the rest will fall into place.”

While Burton has his focus completely on this weekend’s racing, he is also hoping that he can parlay a good run into racing more than just the next few that he has been promised. Currently, Burton is scheduled to compete in five races after Martinsville, including Rockingham, Kansas, Charlotte, Dover and Texas.

“We’ve just got the next five right now and then we have to find some more opportunities with sponsors,” Burton said. “I think State Water Heaters, once they see us run well, they’ll probably continue sponsoring us.”

And as with all young racers today, whether with famous racing last names or just ‘regular guys’, Burton took the opportunity to pitch all of his social media ties, as well as thank his fans.

“If it weren’t for the fans following me, I wouldn’t get to do what I love to do,” Burton said.

SM Staff
Previous articleHot 20 over the past 10 – Smoke ‘em if you got him
Next articleDavid Starr and Arrington Racing head into Martinsville with Zachry Holdings, Inc.