Fans Have Spoken – Excitement is the Key 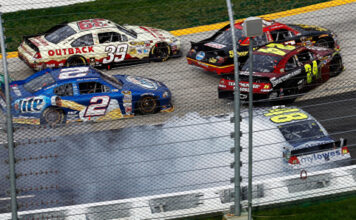 [/media-credit]It has been a solid year for discussion of NASCAR. The season started with the Daytona 500 being delayed by rain. Then, once the green flag fell, all the talk was about Juan Pablo Montoya having an equipment failure, turning right into a jet dryer and the resulting fireball. Of course Matt Kenseth won the race, but true to his personality, no one remembers it. Then after a couple of races, the two top series in NASCAR headed to Bristol Motor Speedway to what appeared to be an empty track (it’s amazing what a large venue looks like half full).

After the rain-shortened race in California, the boys headed to Martinsville. After the first half (and most of the second half) of the race made sleeping medications unneeded, an interesting thing happened. Jeff Gordon dominated that race, but Jimmie Johnson ran him down and took the lead. Gordon wasn’t done, however. Working hard, Gordon and Johnson battled with Gordon taking the lead. Then it happened. David Reutimann, trying to stay in the coveted top 35 in points, which insures a start in the next race, had problems. Running around the track at what many called 20 mph, Reutimann had problems. He couldn’t turn left due to tie rod problems and then the engine gave up the ghost. He stalled on the front stretch. Caution came out, a green-white-checker was in the cards, and the field was bunched up. On the first attempt at the infamous two lap shootout, Clint Bowyer tried to pass both Gordon and Johnson in the first and second turns (the story is fuzzy, but Bowyer says he got pushed by Ryan Newman and had to make the make the attempt to pass while others say that Johnson and Gordon, who did not pit, had old tires and couldn’t get a fast start) and what Gaston Gazette sportswriter Monte Dutton called “synchronized spinning” resulted. Gordon and Johnson finished lower than they deserved and Newman won after a fierce battle with A.J. Allmendinger (where did he come from?).

The verdict was in. I penned a commentary last year saying Martinsville was the new Bristol and that prediction came true. While Bristol had good racing and lots of two-groove passing, the excitement factor was missing. Even though the same factor was missing for 250 laps at Martinsville, the end made everyone leave talking about the race and how great it was. Unfortunately, Reutimann immediately became the villain—the guy who changed the face of the race—it was obvious that Gordon and Johnson had the best cars—and the phone lines lit up on the NASCAR programs on SiriusXM radio. Never has a nice guy been so criticized and discussed. No one wanted to discuss California or Phoenix.

What has been missing the last few years is the excitement factor. When the Bristol track was reconfigured, and when the Chase made drivers so concerned about point totals in their quest for a place in the Chase, we lost that urgency to actually take chances to win a race. Add to that a driver who just wanted to keep his team in the position to make the next race, and the excitement factor raised by 1,000 per cent. People responded.

Those of us that consider us purists and like watching racing are in the minority. Since football has become the sport of choice in these United States, it should be obvious that good old fashioned racing is what has been missing from today’s NASCAR. That’s why I applaud Bruton Smith. He is willing, apparently, even though promised announcements have not been made, to change his track to add that excitement to Bristol. Smith heard the fans and realized that without the fans, there would be no races or NASCAR. That was refreshing. And as many media types or drivers cry about the changes that may come to Bristol, we always have Martinsville. It has pretty much been like it is for over 60 years and it works. That is what racing was like for six decades and the attempt to sterilize the sport should by now be clear to the powers that be is futile. Folks want excitement. And that’s all that matters.

Ron Fleshmanhttp://www.ris-news.com
Ron Fleshman has followed NASCAR racing since attending his first race at Martinsville Speedway in 1964. He joined the Motor Sports Forum on the CompuServe network in the 1980s and became a reporter for Racing Information Systems in 1994. In 2002, he was named NASCAR Editor for RIS when it appeared on the World Wide Web as www.motorsportsforum.com. He can now be found at www.ris-news.com. Ron is a member of the American Auto Racing Writers and Broadcasters Association. You can find Ron following and reporting on the top three NASCAR divisions each week. As a lifer in his support of racing, he attends and reports on nearly 30 events a year and as a member of the motor sports media, his passion has been racing for 47 years. He lives with his family in rural West Virginia and works in the insurance industry when not on the road to another track.
Previous article
Sam Hornish Jr.: I feel like we’re going to continue to work hard
Next article
KENSETH, ROUSH, AND FENNIG SET TO RETURN TO DAYTONA FOR DAYTONA 500 CHAMPION’S EVENT