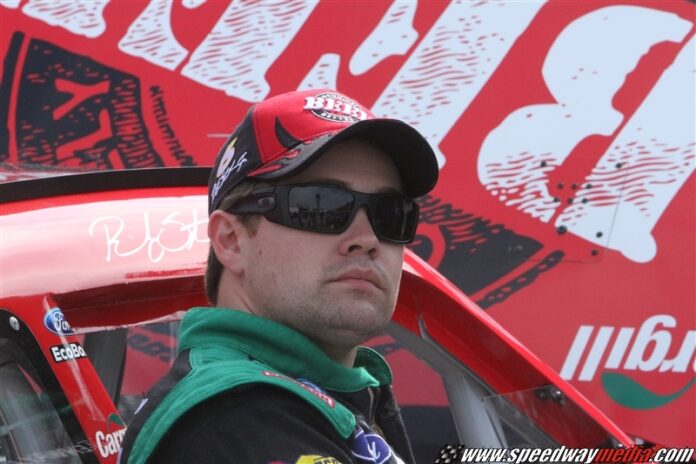 “Ricky’s currently competing for first place and another NASCAR series title, and we’re thrilled that he’ll being doing it in the Cargill Beef No. 6 Ford Mustang for nearly half the races this year,” stated In, Cargill Beef vice president of sales and marketing. “It’s the time of year when we believe NASCAR fans will symbolically ‘start their grills,’ and just as Sunoco is the official fuel of NASCAR racecars, Cargill Beef is the official fuel of the Roush No. 6 Ford Mustang team. High quality protein from burgers to steaks helps the team compete each weekend.”

To kick off Cargill Beef’s Virginia bash, Langley Air Force Base, Langley, Va., is where 1,000 U.S. Air Force personnel will be treated to the debut of the new paint scheme on the No. 6 Ford Mustang, Thursday, April 26. While there, Stenhouse will conduct an autograph session and 100% pure beef, nutritious, flavorful, quality burgers will be grilled and served to the invited Air Force personnel.

Friday, April 27, will be the public debut of the new Cargill Beef paint scheme when up to 500 Stenhouse fans will have a chance to attend a grilled burger lunch at Richmond International Speedway, near the souvenir sales area, from 11 a.m. to 1 p.m. Stenhouse posted a blog this week and is sending Tweets to followers, alerting them about this opportunity to enjoy a burger with the No. 6 team. On Saturday, April 28, media will be invited to sample burgers at the track. To ensure great flavor, juiciness and leanness, all Cargill Beef burgers served at Langley Air Force Base and Richmond International Speedway will include finely textured beef.

Cargill will be marrying the power of stock car racing, the expertise and experience of Roush Fenway Racing, the allure and value of the series defending champion driver with beef products that appeal to consumers and retail grocery channel distribution across the nation. A program to help consumers better understand how beef is produced, its nutritional value as part of a balanced diet, and the many types of beef products that feed Americans will also be launched at Richmond. Two new, informative, Internet web sites for consumers who love beef will be launched over the weekend: www.ilikebeefinmybeef.com and www.truthaboutbeef.com. [/media-credit]Ground beef for burgers, chili, tacos and other race tailgating dishes is an American dietary staple that provides protein, vitamins, iron and other essential nutrients to keep hard-working race team members going during the February to November season. Grocery stores will be supporting the Cargill Beef No. 6 team effort in communities where the car will be racing, including show car and driver appearances by Stenhouse, burger grilling events and other activities focused on nutritious, quality, safe and affordable ground beef that Americans, especially race fans, enjoy.

“After a hard-fought race, there’s nothing better than a big, juicy, delicious Cargill Beef burger loaded with all of my favorite fixings,” explained Stenhouse. “Protein is important for helping me stay focused and gives me theability to respond to rapidly changing track situations during long races when split-second decisions and speed in the pit box are critical to a winning effort. I’m excited about the opportunity to drive more races for Cargill Beef this season, especially knowing their burgers, steaks and other great beef products will be helping us get to victory lane in our run toward another series title.”

“Grilling burgers is as American as NASCAR racing, and Ricky does a wonderful job as an ambassador for both,” stated Shaw. “We’ll leave the driving and car set-up and race day maintenance to the team, and we’ll do our part to keep them well fueled with Cargill burgers and steaks, which has proven to be a winning formula on, and off, the track.”

Cargill is an international producer and marketer of food, agricultural, financial and industrial products and services. Founded in 1865, the privately held company employs 139,000 people in 65 countries. Cargill helps customers succeed through collaboration and innovation, and is committed to applying its global knowledge and experience to help meet economic, environmental and social challenges wherever it does business. For more information, visit Cargill.com and its news center.