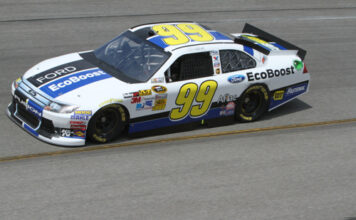 [/media-credit]For the first half of the race, it looked like Carl Edwards would be the man in victory lane at the end of the Capitol City 400. However, after a late race penalty Edwards was put to the rear of the field, giving the lead up for grabs.

After leading for 206 laps, Edwards was black flagged for jumping the restart on Lap 320. He was forced to make a pass through penalty on pit road, which dropped him back to 15th place. The No. 99 team was very irate about the situation, but NASCAR wasn’t hearing it. Edwards’ team was confused about the situation and wanted to know if they received the penalty for jumping the restart, or for beating Stewart to the line.

Either way you look at it, this penalty gave Stewart the lead of the race.  Kyle Busch, Dale Earnhardt Jr., Kasey Kahne, and AJ Allmendinger rounded out the Top 5. Stewart and Busch led the field with seven seconds over Earnhardt. It looked as if Stewart would drive to his third victory lane of the season until caution for debris flew once again with 14 laps to go. Edwards received the lucky dog during this caution and was back on the lead lap.

After problems on pit road for Stewart, Busch won the race off of pit road. Stewart spun his tires once again on the restart, allowing Earnhardt to take over second position and give the fans something to yell about. Earnhardt trailed Busch by half a second but wasn’t able to catch him when the checkered flag waved. Finishing second has moved Earnhardt to second position in point’s standings, just five points from the leader.

Busch took Richmond by storm, winning the Nationwide race as the car owner of Kyle Busch Motorsports, and winning as a driver for Joe Gibbs Racing. Busch has been flying under the radar this season and is lower in points than we normally see him. Winning at Richmond gained him two positions in points, moving him to 11th position.

What’s On the Horizon for Talladega?

The good thing about Talladega is: it’s anybody’s race! It doesn’t matter where you start, because it only takes one lap for a driver to move from last to first position, or vice versa. Talladega is the biggest and wildest track on the circuit and it never fails to put on a good show.  Jimmie Johnson won the Aaron’s 499 last year, and he could very well do it again. However, I’m looking at Michael Waltrip Racing in Talladega.

I believe that MWR will be a force to reckon with at the Superspeedway. Owner Michael Waltrip will get behind the wheel of the No. 55 to race at a track that he has won before. Everyone knows that Waltrip is a master at superspeedways and his drivers, Martin Truex Jr. and Clint Bowyer, aren’t too shabby either. [/media-credit]Bowyer has two career wins at Talladega, along with six top 10 finishes. Although Truex hasn’t won at Talladega in the Cup series, he has won the Aaron’s 312 Nationwide race three years in a row. Truex has been oh so close to reaching victory lane this season and I think Talladega will be where he gets his first win of 2012.