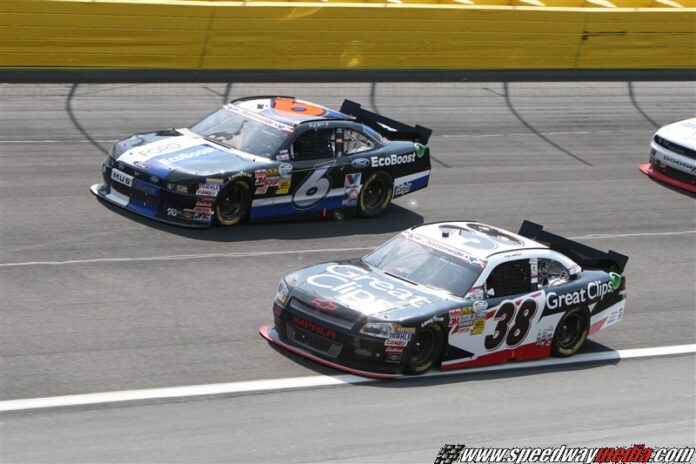 [/media-credit]Just as quickly as Ricky Stenhouse Jr. entered the picture on Saturday in the History 300 at Charlotte, he left it.

Stenhouse finished 26th in his No. 6 EcoBoost Ford after the transmission went south on lap 65. He’d qualified third and was running in the top 10 when he felt something go wrong and had to pit. The team eventually headed to the garage to fix the issue before Stenhouse was able to rejoin the race.

“I think the U-joint between the driveshaft and the transmission broke first,” said Stenhouse afterwards. “We’re gonna have to go back and look at it. It was a new driveshaft, new everything, so it was a tough day. Our Ford EcoBoost Mustang was by a far a top five car and had a chance to win for sure, so we can take that from today and go on.

“Our mile and a half program this year has been really strong and it was strong again here today. We went back out and tried to learn some things for our Cup guys and learn some things for us the next time we come back here. We had a really fast car there at the end, so all in all, it was obviously a tough day for points, but we’ve got to hang out hat on we were really fast.”

Stenhouse said he began to feel a vibration in the car while under caution. But when he came down pit road he didn’t see anything and went back on track for the restart. That’s when it finally broke and TV cameras caught a piece of metal fly out from underneath his machine.

It took the team 21 laps to repair the car to be able to send Stenhouse back out to salvage any points they could. Stenhouse had entered the day 34 points ahead of second place Elliott Sadler and on an impressive streak of not having finished outside the top six in the last nine races.

After Saturday though, Stenhouse’s point lead sits at 13 over Sadler as he suffered his worst finish since the season opening race in Daytona. Certainly not what the team had in mind coming off their third win of the season last weekend in Iowa and driving the same car they had won with in Texas last month.

It was a fast car, so fast that even while Stenhouse was multiple laps down he was racing amongst the leaders. That didn’t go over well with his competition, specifically Richard Childress and his driver Austin Dillon.

As Stenhouse came up and passed Dillon the young driver shouted over the radio that if he was able to get to Stenhouse he was going to hit him. Childress agreed, saying Stenhouse would have deserved it and then used a five-letter word to describe the champion. Dillon was unable to ever get to Stenhouse’s back bumper.

For Stenhouse though, it’s apart of racing and he has no regrets. He knew exactly what he was doing and why he was doing it at that point in the race. And while others might have said it wasn’t appropriate, Stenhouse won’t apologize for it.

“I’m just letting them know we’re here to win,” said Stenhouse of actions. “We pulled away by more than a straightway. I was respectful of the guys – the 20 [Joey Logano] and the 30 [James Buescher] – I was respectful to them because they were battling for position there at the end.

“I got to them and could have passed them, but I backed off and rode around. We’ve got to go out and get every lap we can and if that means running as hard as we can, we’re trying to learn, I’m not gonna just ride around.”

He further defending himself by saying he would never put others in jeopardy and put himself in a position where someone would end up wrecked. Stenhouse was just looking to see how fast his car was and what he could do with it in traffic. Unfortunately he had to do so in that position instead of contending for the win.

But the defending champions aren’t panicking. Their competition knew they were there Saturday and Stenhouse feels confident it will be more of the same going forward. The NNS heads to Dover next weekend where Stenhouse finished fourth last season.

“It doesn’t at all,” said Stenhouse when asked if his outlook changes now. “We’re gonna go out to win every week. We’ve been fast at Dover every single time we’ve been there.

“We’re going to win. That’s what we do every week and I think we’re gonna have a shot at it next weekend.”