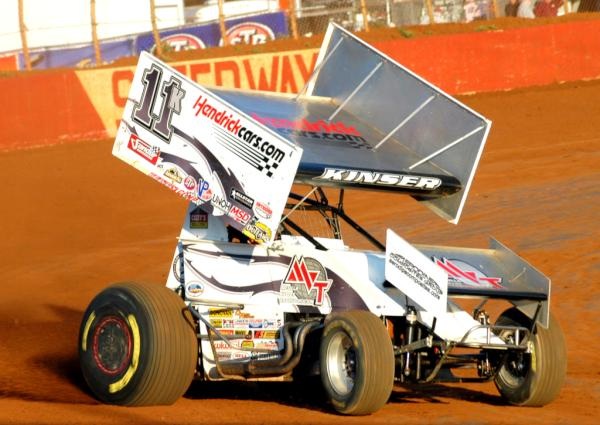 [/media-credit]Tonight the World of Outlaw Sprints were back in Kokomo, Indiana for the third round of the Kasey Kahne Challenge. The Outlaws are returning to Kokomo for the first time since 2007.

Steve Kinser, who leads the current championship standings, has claimed a series-best six feature wins at the quarter-mile oval. However, there has been a different winner in each of the past six World of Outlaws events at Kokomo Speedway dating back to 1993.

Kokomo Speedway is a fast, 1/4 mile semi-banked clay oval. Over the years the track has played host to virtually a who’s who in racing history. A.J. Foyt, Mario Andretti, Lloyd Ruby, Troy Ruttman, Johnny Parsons, Parnelli Jones, Bill Vuckovich, Pancho Carter, John Andretti, Steve Butler, J.J. Yeley, Steve Kinser, Jack Hewitt, Rich Vogler, Tom Bigelow, Tony Stewart and Mike Groff are among those who have both raced at the track as well as in the Indianapolis 500.

Sprint Cup standouts like Ryan Newman, Jeff Gordon, Ken Schrader, Kasey Kahne, Yeley, Stewart and Dave Blaney are just a few who have visited the track over the years.

A record setting crowd for Kokomo Speedway would see a new track record set by Sammy Swindell in qualifying, with a lap of 10.950 or 82.192 mph shattering the old record of 11.021 set in September of 2006 by Jeremy Campbell.

The 31 car field ran 3 heat races that each transferred 6 to the A Main and 2 to the Dash. The first heat was red flagged for repairs to the catch fence in turns 1 and 2 when Geoff Dodge got up into the wall and damaged the catch fence with his right rear tire. Dodge would retire until the B Main. The first heat would be won by Joey Saldana with Sammy Swindell coming home second. Kyle Larson, Brad Sweet, Brady Bacon and Brian Paulus would also transfer to the A Main.

The third heat would see 4 time champion Donny Schatz leading the way across the stripe with Kerry Madsen close behind. Bill Rose had a great night coming home third. Kraig Kinser, Cody Darrah and Sheldon Haudenschild would round out the transfer list.

The Dash inversion was drawn by fast time holder Sammy Swindell. The inversion was a 6 putting Swindell on the outside of the 3rd row to start the 10 lap dash. In the end, it would be Joey Saldana on the pole of the A Main with team mate, Brad Sweet to the outside.

The B Main was a fast moving highly contested event that would see Chad Kemenah come home in the lead. Transfering the top 6 with the top 4 getting their time back and the last 2 starting tail of the A Main, Kody Kinser, Austen Wheatly, Randy Hannagan, Logan Schuchart and Danny Smith would transfer to the A.

With the field set it was time to determine the king of Kokomo. The A Main took 3 tries to get going. Red Flagged on the first lap for Brian Paulus’ wild roll in turn 3 and then under yellow for a 3 car spin out of 4 that would collect Brady Bacon, Sheldon Haudenschild and Cody Darrah. The 40 lap feature proved to be one of the most exciting of the year with Kraig Kinser taking the lead just before lap 20 and holding off a hard charging Craig Dollansky in tight traffic for his first win of the 2012 season. Dale Blaney would advance from 17th to 4th to win the KSE Hard Charger award. Points leader Steve Kinser would come home 7th and second place points man Donny Schatz would finish in 6th.

Kokomo proved to be another difficult night for Sammy Swindell who ended up on his roof before half way in the A Main while racing with Brad Sweet for 4th.

Kokomo reassured us that big things do indeed come in small packages and small packages should never be under estimated. The mighty wings of the outlaws once again put on a show that was second to none. And although the king of Kokomo remains the King of the Outlaws it obviously runs in the blood. Congratulations to Kraig Kinser and everyone at Steve Kinser Racing on their first win of the season.