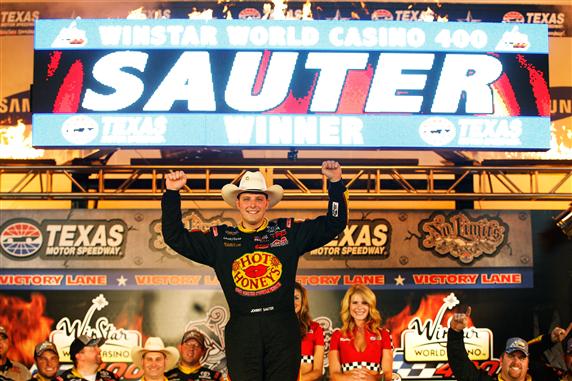 [/media-credit]After having bad luck for the first six races this year, Johnny Sauter would come home victorious in the seventh race of the season as he won the WinStar World Casino 400 at Texas Motor Speedway. It marked his first victory and his second top 10 finish of the 2012 season.

“First of all, I want to thank everyone at Peanut Roaster, Toyota, everyone at ThorSport,” Sauter says. “This is unbelievable. After all the bad luck this year, good to get this. I wasn’t sure what was going on with the restart there – first I was third, then I was fourth. The bottom was where you wanted to be on the restarts there. Great job by (crew chief) Joe.”

Sauter led early in the race before problems on pit road set him back to the bottom half of the top 10. With 22 to go, he was able to pass ThorSport Racing teammate Matt Crafton and never looked back.

“It was a bit too much,” Crafton says. “I was a little bit tight the previous one, went up a bit on the right rear and it was just a little too much. When I had Johnny right up there behind me, I was loose. I just burned the right rear off trying to hold Johnny off. This Thorsport organization is awesome.”

Jason Leftler would come home sixth with rookie Ty Dillon seventh. Dillon was battling with James Buescher for the lead with 31 laps to go when Dillon got loose and caused both drivers to wreck.

“”He was mad, but I’m not just going to pull over and let him go,” Dillon says. “I’m racing for my first career win.  “I’m goin’ to win races. If he’s not, then he can go where they don’t allow blocking and hard racing.”

Buescher would come home with a 15th place finish and make contact with Dillon as they entered pit road and then have a discussion on pit road afterwards.

“Ty just kept running me up the hill,” Buescher says. “He needs to learn how much space you need on the right sides of these trucks”

Rookie Cale Gale would finish eighth followed by Justin Lofton and Parker Kligerman. Lofton would lead the most laps at 55, though after staying out under a caution, he had to pit before the leaders and got trapped a lap down. He would take the wave around and work his way back up to the top 10.

“No warning at all,” Bodine says. “I think it broke a valve, dropped a piston and then it just locked up. We were just messing with Ty (Dillon) there. We could’ve went up and done more. I gotta thank (car owner) Todd for what he has done with this team. He’s done a great job. We’ve got a great team. It was just a part failure. Can’t be mad about that. They happen.”