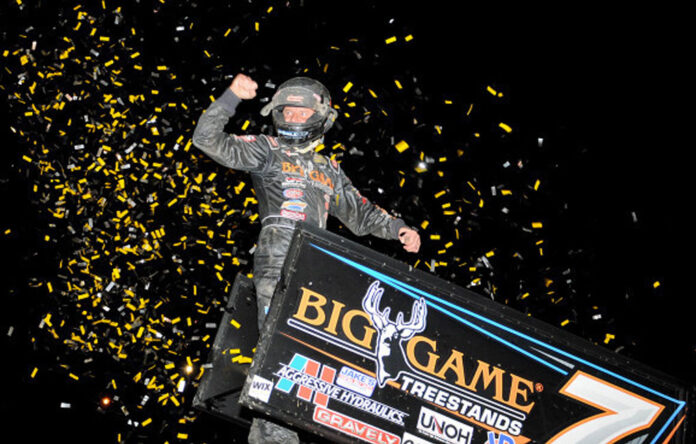 [/media-credit]Racing is all about numbers. The cars have numbers. The drivers are known by their numbers. Laps are timed and posted for positioning in numbers. It’s always better to draw a low number than a high number in racing. Careers are judged by the number of wins and championships. Racing is a game of math the simplest being adding to the win column to improve one’s overall position in the points so as to add another or a first championship to your resume. Tonight Craig Dollansky achieved a milestone when he won his 50th A Main event with the World of Outlaws.

The evening at Lebanon Valley, NY, saw an unusually low car count for the Outlaws, with only 23 cars signing in for tonight’s racing. With all the cars in attendance transferring to the A Main qualifying became even more important than normal. A driver’s qualifying time would determine where he would start the A Main if he didn’t transfer to the dash. Craig Dollansky set the pace early turning a lap of 16.582 or 130.262 mph around the semi banked 1/2 mile track. Dollansky’s lap was just .229 seconds off the track record of 16.353 set by Danny Lasoski on 5/27/03. The top 10 would be separated by only .658 seconds.

The first heat race brought trouble for last nights winner Cody Darrah as he had an engine let go early on, relegating him to last place in the heat. The race would be won by Jessica Zemken who held off a charging Craig Dollansky and Kraig Kinser. The heat would also find the seeming slump continuing for 4 time world of Outlaws champion Donny Schatz who finished a distant 5th.

The second heat held perhaps one of the truest illustrations of the level of skill that is possessed in the Outlaws series when Sammy Swindell dropped a cylinder on the pace laps and still held off the field to finish second. Logan Schuchart would win the race but the skills it took to run just hard enough to make it to the end and not so hard as to blow the engine up required not only the technical expertise with the engine but also the driving skills to make up for the horsepower that he didn’t have but that the other competitors did. Lucas Wolfe would push Swindell hard but he couldn’t find a way around the wily master and had to settle for 3rd.

The third heat would be won by Tim Kaeding with Joey Saldana in pursuit all the way to the checkers. The pair set sail and left 3rd place Chad Kemenah in their wake.

The Dash was a different situation tonight with so few cars. The top 2 from each heat still transferred to the Dash. But the other 4 cars had to have finished in the top 6 of their heat in order to be eligible for the Dash. But there would be another bump in the road for 2 of the Dash competitors. Jessica Zemken and Bill Rose both had right rear tire damage. According to Outlaws rules you can not change the Right rear tire before the dash. Neither competitor had a choice in changing the tire and so they were not allowed to run the dash but instead relegated to 9th and 10th starting positions in the A Main. The Dash inversion was a 4 putting Lucas Wolfe on the pole with Joey Saldana on the outside front row. Saldana would take the lead in turn 1 and never look back. Craig Dollansky would get by Wolfe for 2nd to set up the front row that would start the A Main.

With only 23 cars in attendance there was no need for a B Main. So the action went right to the A Main. Joey Saldana would lead all the way until lap 20. After trying nearly every lap on the low side to get around Saldana, Craig Dollansky would make the pass on the high side in traffic and drive by Saldana, bringing Daryn Pittman with him. Pittman would challenge Dollansky briefly before the checkered flag waved giving Dollansky his 50th win. Saldana would come home 3rd.

The final 6 laps of the race showed a resurgence for Donny Schatz who restarted in 12th and in 5 laps climbed up to 6th and finished in 6th as the races KSE Hard charger having started in the 13th spot. It would see another night of strange and difficult situations for Sammy Swindell who had to change an engine before the dash and then had a left rear tire go down to bring out the only caution in the A Main. Swindell would finish 13th. The King of the Outlaws would run in the top 10 all evening until the final lap of the feature when he slowed dramatically as the checkers flew and finished an uncharacteristic 15th.

Every racing series has a measuring stick. That one driver that everyone struggles and works to measure up to. In NASCAR it’s Richard Petty or Dale Earnhardt. In Indy Car Racing it’s Mario Andretti or Rick Mears. In the World of Outlaws it’s Steve Kinser. His 20 national championships and 573 wins sets him apart from competitors not only in his own genre of racing but every genre of racing. Tonight at Lebanon Valley, NY, Craig Dollansky inched a half step forward towards that yard stick when he won his 50th A Main Feature. Yes it’s a long way from 573, but it’s a great deal further than many in other forms of racing have to call their own.

Dollansky’s win was hard fought and won. On a track that saw few passes made until the late stages of the race, Dollansky had a tough road to drive getting by Joey Saldana to take the lead and win the 25 lap $10,000 purse tonight. Saldana was strong and he seemed to know exactly where Dollansky was going to try his pass and when. Saldana is a fierce competitor in his own right and owns 82 career wins of his own, and on this tight narrow short track he was tough to get around. But Dollansky used lapped traffic and made a daring pass to the outside and drove around Saldana. Once by him he didn’t look back, and it was probably a good thing because if he had he would have found a new foe chomping at his heels in Daryn Pittman. Pittman tried high. Pittman tried low. That is after all what racing is about, winning. Not playing the numbers and playing it safe but winning. In the end  win number 50 was Craig’s. “The Crowd Pleaser” as he is known lived up to his nick name.