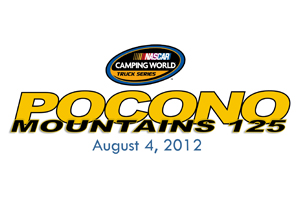 Rough racing on the new smooth track… Justin Lofton will join the other competitors in the NASCAR Camping World Truck Series (NCWTS) on the third annual trip to Pennsylvania for the Pocono Mountains 125 on Saturday, August 4. In his debut at Pocono (Pa.) Raceway, Lofton brought home a fifth-place finish and followed it up with a 16th-place finish in 2011. This year, drivers will be challenged with a new track surface after the 2.5-mile speedway underwent a major repave following last year’s race.

Flying around the track with Millennium VIP Group Private Jet Services… Lofton’s No. 6 Chevrolet will have a new sponsor on their hood this weekend at Pocono Raceway. Millennium VIP Group Private Jet Services, a premier charter service provider, will be featured on the hood of Lofton’s Chevrolet. Additionally, the Las Vegas-based company will serve as a secondary sponsor for Lofton at Michigan International Speedway and Bristol (Tenn.) Motor Speedway later this month. For additional information and to learn more about Millennium VIP Group’s product offerings, visit www.millvipgroup.com.

Exploring the desert… Like many drivers in the NCWTS, Lofton enjoyed a weekend away from the track last week, but just because he wasn’t on a speedway, doesn’t mean that he wasn’t going fast. Lofton joined his father, Bob Lofton, in a Jeep to take a three-day, 900-mile tour off-roading across Nevada. The duo joined seven other vehicles, including Lofton’s General Tire teammate Garrick Freitas, in an adventure to explore the “Wild West” including the many silver mines and ghost towns in the Nevada desert. The event started in Las Vegas, Nev., included stops for the evening in Ely, Nev. and Tonopah, Nev., and concluded in Goldfield, Nev.

Fore! … In addition to battling it out for the NCWTS championship, Lofton will take on the competition off the track at the Third Annual Onion Slice Open on Thursday, August 2. While teams are pushing their trucks through tech, many drivers will be enjoying a day on the golf course. Held at the Blue Ridge Trail Golf Course in Mountain Top, Pa., the Onion Slice Open is hosted by Todd & Janet Bodine. Lofton will join several other NASCAR drivers at the popular tournament, including NCWTS driver Matt Crafton who will play in Lofton’s foursome. The Onion Slice Open will kick off with a shotgun start at 12:00 p.m. ET on Thursday, August 2.

Meet Justin Lofton… Fans will have several opportunities to meet Lofton throughout the race weekend at Pocono Raceway. The driver of the No. 6 Millennium VIP Group Private Jet Services Chevrolet will participate in the NCWTS Autograph Session on Friday afternoon, August 3, from 1:00 p.m. until 2:00 p.m. in the fan midway. At 3:00 p.m., Lofton will join teammate Cale Gale at the Chevy Stage for a Q&A session. Later that evening, Lofton and Gale will make an appearance at Pocono Raceway’s Infield Concert Stage for another Q&A session from 6:20 p.m. until 6:35 p.m.

Follow Justin… Follow Justin Lofton, driver of the No. 6 Millennium VIP Group Private Jet Services Chevrolet Silverado, on twitter @jlracing and Facebook (facebook.com/jlracing), and check out the new loftonracing.com for the latest news and updates.

Get the inside scoop… Follow Eddie Sharp Racing on Twitter or become a fan on Facebook to get real-time updates and behind-the-scenes information: @TeamESR or facebook.com/teamesr.

Watch and listen… The NASCAR Camping World Truck Series takes on The Tricky Triangle this weekend at Pocono Raceway on Saturday, August 4. Live coverage of the Pocono Mountains 125 will be aired on SPEED, MRN, and SiriusXM NASCAR Radio, channel 90, beginning at 12:30 p.m. ET.

From the Driver’s Seat

Justin Lofton Quotes… On racing at Pocono Raceway: “I’m looking forward to racing on the new surface at Pocono Raceway. I really enjoy the track, and we’re looking forward to continuing our battle for the championship with the Millennium VIP Group Private Jet Services team. Pocono is always challenging with its diverse turns, add a new surface into the mix and it should be a really fun, interesting race.”

From the Pit Box

Dan Bormann Quotes… Looking forward to Pocono Raceway with the No. 6 team: “All the guys on the Millennium VIP Group Private Jet Services team have been working hard at the shop. We’ve had our work cut out for us; we hoped to come out of Chicagoland a little bit better in the points. We know that this week’s race at Pocono is an important one for us, and we also know that Justin has been successful here in the past. We hope to have another strong run this weekend; our team is dedicated to contending for the championship.”

The No. 6 Millennium VIP Group Private Jet Services Chevrolet team will compete with chassis No. 044 as their primary truck at Pocono Raceway. Originally acquired from Kevin Harvick Inc., it will be the first time that ESR competes with chassis No. 044.

About Eddie Sharp Racing: Eddie Sharp Racing (ESR) (TeamESR.com) is a championship winning racing team housed in a 45,000 square-foot facility in Denver, N.C. After getting its start in the Automobile Racing Club of America (ARCA) Racing Series, ESR has accumulated upwards of 20 race wins, the 2009 ARCA Racing Series Championship, and countless top-five and top-10 finishes in just five years of competition. By 2010, ESR began to make the transition into the NASCAR Camping World Truck Series (NCWTS) with a partial schedule before racing in the series full-time in 2011. By 2012, the team expanded to be a multi-truck team and secured its first victory in just the team’s 35th NCWTS race. Additionally, ESR continues to build its driver development program fielding various drivers in the ARCA Racing Series, the United Auto Racing Association (UARA) STARS Series and other late model events across the southeast.

About Millennium VIP Group Private Jet Services: World Class Jet Charters and Fleet Service since 2002. We are a privately owned, full service luxury executive Jet Charter Service, that offers 100% up time to our clients traveling to or from any airport in the world. MillenniumAire has a long history of luxury jet services to our loyal clients for 10 years now. We operate our own fleet of jets and our corporate headquarters are located in Las Vegas, NV, along with offices in Long Beach, Calif. and Aurora, Ore. Our jet charter professional, charter concierge, Pilots and jet maintenance crews are not only the most qualified, but the finest professionals you’ll encounter in the industry, bar none. MillenniumAire Jet Charters can be arranged for any city, on demand. Please call us toll free at (888) 891-5505.