After a solid regular season, Biffle just hoping for top 5 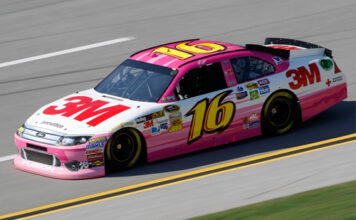 [/media-credit]No DNF’s, 99.9% laps completed (only missed five laps of 8,231), 2 wins, 10 top fives, 15 top tens, 14 weeks atop the points standings. These numbers indicate a spectacular season, and one that many Sprint Cup drivers would love to have. However, even with all this success, Greg Biffle, who has struggled in the Chase, with finishes of 13th, 18th, 16th, is now focusing on trying finish in the top 5 in the season standings.

“I feel we’re racing for a top-five finish in the points. We really want to get in the top five in points.” Biffle said.

Biffle, who is known for being a hard charging driver, recently had his radio communications with his team become news when he expressed displeasure with his crew after they left a wheel loose last week at Dover. Many are saying this could be the result of pressure to perform.

In fairness to Biffle, his Roush-Fenway teammates aren’t performing very well either. Only he and teammate Matt Kenseth made in into the Chase, and Kenseth is the only driver behind Biffle in the standings. Biffle’s intense personality and seeing what appeared to be “his year” slipping away, may be the undoing of the No.16 team’s season. If he and the team can stay focused, their goal of a top five points finish may be attainable.  But as Biffle says, “We’ve got a big hill to climb”

“Can we win the title? Sure. I mean, obviously we can, but the deck is kind of stacked against us. We’ve got a big hill to climb, but nobody here is saying that we’re not gonna try or we’re not gonna do it. We’re gonna have to try all we can to get in the top five. Look at the guys from 13th and back that aren’t in the Chase, they’re trying to win too.” Biffle said.

Roger Holtsclawhttp://www.nationalmotorsportsnetwork.com
Roger has over 24 years experience as a mechanic and crew member in NASCAR at many levels including Cup, Nationwide and Truck Series. He has also competed as a driver at many short tracks around the Southeast including one start the USAR Hooter's Pro Cup Series. Roger is now embarking on a motorsports journalism and photography career and is co-owner of HMP Photo. Follow me on Twitter @rogerholtsclaw Email me: roger@speedwaymedia.com
Previous articleToyota NSCS Talladega Notes & Quotes – Denny Hamlin
Next articleDillon takes NASCAR Camping World Truck Series pole at Talladega