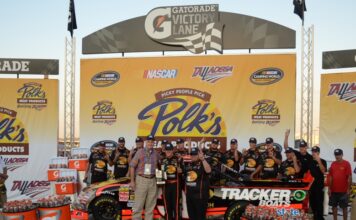 [/media-credit]Ty Dillon came to Talladega Superspeedway with just a one point advantage over James Buescher in the series standings. If the twenty year old rookie driver is under any pressure, he isn’t showing it. Dillon took the top starting spot for Saturday’s Fred’s 250 powered by Coca-Cola with a lap of 177.291 mph. It was his third career pole in just twenty one starts in the series.

Dillon is following in the footsteps of his older brother and making a name for himself in the series with an eye locked on one day piloting a NASCAR Sprint Cup Series car for his grandfather, team owner Richard Childress (RCR).

Kurt Busch had to settle for the sixth starting spot after leading the final practice session.

“I’m more of a rookie than all of the rest of these guys when it comes to the draft, because they’ve been doing it the last few years. The last time I did a restrictor plate truck race was back in 2000. It’s been a while.” Busch said.

“It is handling good. We unloaded our Tundra and it was really good. We drafted just a little bit to save our equipment and that will give us a good solid starting position and as long as we can complete 94 laps we’ll be alright.” Peters said.

The green flag will drop on the Fred’s 250 powered by Coca-Cola at 3:00pm Saturday.

Roger Holtsclawhttp://www.nationalmotorsportsnetwork.com
Roger has over 24 years experience as a mechanic and crew member in NASCAR at many levels including Cup, Nationwide and Truck Series. He has also competed as a driver at many short tracks around the Southeast including one start the USAR Hooter's Pro Cup Series. Roger is now embarking on a motorsports journalism and photography career and is co-owner of HMP Photo. Follow me on Twitter @rogerholtsclaw Email me: roger@speedwaymedia.com
Previous articleAfter a solid regular season, Biffle just hoping for top 5
Next articleCHEVY NSCS AT TALLADEGA TWO: Jimmie Johnson Press Conf. Transcript