Gustafson – Overcoming obstacles with one goal in mind 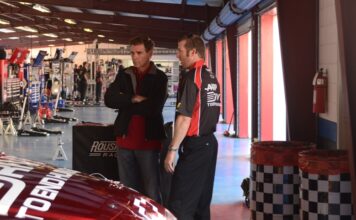 [/media-credit]Hendrick Motorsports crew chief, Alan Gustafson, continues to showcase his talent when faced with adversity. The gusty chassis adjustment call at Richmond earlier this season that vaulted his No. 24 team into the Chase when the possibility of making the postseason looked grim, was just one example of many timely and “out of the box” calls Gustafson has made to overcome a problem.

Every team he has led performed well, but it seems the Sprint Cup Series’ inevitable variables seem to bite at inopportune times. Whether it be caught up in someone else’s crash, having a part failure or the rare occasions, like at Richmond, when the team just simply misses the setup, Gustafson always shows the ability to make a quick, crafty call that overcomes seemingly insurmountable odds.

When I asked Gustafson about other events this season where he had to climb out of a hole and think outside the box, he pointed out, “The most recent races stick out in your mind the most, but at Atlanta, we started up front at Atlanta and struggled at the start of that race. Even though we took the lead the car got really, really loose, really quick.” he continued, “The Richmond thing was really so pronounced because it was so visual, but I think at Atlanta we struggled as bad, but we were able to work on the car, work on the car and work on the car and then race Truex for the win at the end, and ultimately after the restart race Denny for the win.”

“Another time I think of is Daytona , it wasn’t really something that I did, but it shows the commitment of this team, Daytona in the summer, we were running third and got wrecked on pit road, which is crazy right, you never know, you’re coming down pit road and you get wrecked. And our car was hurt and the guys did a phenomenal job fixing the car and we ended up getting a 12th place finish and you sit back and you think to yourself, well 12th place is not that great, but if we hadn’t got that finish, we wouldn’t have been able to beat Kyle at Richmond.”

It’s obvious from talking to him that he is very proud of his team.

This ability to think outside the box is obviously something that team owner Rick Hendrick looks for in his crew chiefs. Historically, Hendrick Motorsports has always had the most talented crew chiefs.  Chad Knauss, Steve Letarte and of course the amazing Ray Evernham are just a few examples. Gustafson is a perfect addition to this list. As Ray Evernham pointed out to me today, “I think Alan is one of the finest crew chiefs in the sport. I really believe he is going to lead Jeff to his fifth championship.” [/media-credit]Gustafson has proven he can win with a variety of different drivers. An all-star line-up of talent that is highlighted by names like Kyle Busch, Mark Martin and of course now four time champion Jeff Gordon. His record emphasizes his ability to adapt. Every driver is different, some temperamental, some laid back. Some drivers feel they can make better decisions than the crew chief can, some have to have feedback forced out of them. There is no single textbook recipe to perform this job. A fluid thought process is a required to be successful with numerous drivers. Some crew chiefs hit that magic combination with one driver, but can’t attain it with any other.

Now that the No.24 team has made the Chase, adversity once again struck in the Chase opener at Chicagoland Speedway. A crash on lap 190 resulted in a 35th place finish for the DuPont Chevrolet. That finish dropped the team to 12th place in the standings, last among Chase contenders. This once again puts Gustafson in the position of having to be creative and clear the hurdles that life has placed in front of him. In typical fashion, the No.24 group came back strong with a third place finish at New Hampshire and great fuel mileage strategy en route to a second place finish at Dover. Even with these terrific finishes, Gordon still lost points to the leader though he did manage to move up in the standings.

I asked Gustafson if he felt that his team has now used their mulligan, and does he feel that the other teams in contention will ultimately stumble as well. Gustafson responded, “.. we can’t concern ourselves with them, .. we have to focus on doing the best we can.”

However this weekend there is a larger, more unpredictable hurdle to clear, Talladega. Long known as NASCAR’s wildcard race, at this track anything can happen. If Gordon can keep the car out of harm’s way and this could be the place to regain what they lost at Chicagoland. This track presents so many opportunities for teams to find trouble, that the top four drivers on the standings could easily lose their momentum and find themselves at the back of the finishing order and put Gordon and Gustafson right back in the hunt the championship.

Being that Gustafson is a top crew chief in NASCAR’s premier series, I expected him to pattern himself after a famous crew chief from the past, however, when I asked him what person he admires and looks up to, his response was, “If I pattern myself after anyone, it’s probably our owner Mr. Hendrick, he’s a great , incredible leader…. he knows how to manage people, how hire people and inspire people. No matter what field you are in.  Whether it’s you are gonna do writing this story, or what I am gonna go Sunday, or what he does at his car dealerships.” This type of respect is what builds great relationships.

Statistically, eventually the stars have to line up for Gustafson. Given his track record, and his proven ability to find that proverbial needle in the haystack solution, Gustafson is definitely on the precipice of a championship in NASCAR premier series.

Roger Holtsclawhttp://www.nationalmotorsportsnetwork.com
Roger has over 24 years experience as a mechanic and crew member in NASCAR at many levels including Cup, Nationwide and Truck Series. He has also competed as a driver at many short tracks around the Southeast including one start the USAR Hooter's Pro Cup Series. Roger is now embarking on a motorsports journalism and photography career and is co-owner of HMP Photo. Follow me on Twitter @rogerholtsclaw Email me: roger@speedwaymedia.com
Previous articleToyota NCWTS Talladega Post-Race Notes & Quotes
Next articleSteve Kinser Notches Win 574 At Rolling Wheels Raceway