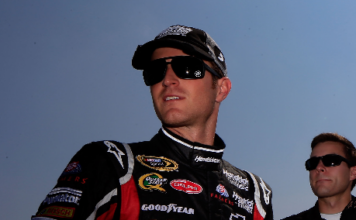 [/media-credit]As we enter race No.4 of the 2012 Chase, a definite separation in the points standings has become apparent. The front-runners, Brad Keselowski, Jimmie Johnson, and Denny Hamlin are hoping to make it through NASCAR’s “wildcard” race unscathed. If things go well, they could solidify their lead and put themselves in a great position for the final six races. Though anything can happen at any race, Talladega has a statistical higher probability of being the fly in the ointment. If a team makes it through without losing anything, it takes away a little stress and quiets that small, annoying voice in the back of their mind. If disaster strikes, it can create much more pressure going forward.

The irony is that the top three drivers didn’t qualify well. Johnson will start 17th, with Keselowski and Hamlin taking the green in 22nd and 23rd respectively. This puts them in the middle of the pack at the start on a track that received some rain last night making it more unpredictable than usual. These teams will be on edge until the pack settles down.

Clint Bowyer who is 25 points behind the leader, is in the mid-pack position. He is not tight with the leaders, but within a moderately easy striking distance. Fortunately for Bowyer, he had a solid qualifying effort on Saturday and will start third. This will permit him to hopefully be in front of any early race altercations. Bowyer’s spirit were high in the garage area Saturday and his relaxed mood a key ingredient for a successful race at NASCAR’s largest oval.

Tony Stewart and Kasey Kahne are on top of the second group of drivers.  Stewart and Kahne are 32 points back. Kahne put his Hendrickcars.com Chevy on the pole and Stewart will roll off fourth. More importantly, Stewart will lineup behind his teammate Ryan Newman who qualified second.

Dale Earnhardt Jr. is 39 points back, but has a very successful record at Talladega. “I feel pretty good, because I have nothing to lose.” Earnhardt said yesterday. This attitude could be the formula he needs to have a solid day on Sunday.

Martin Truex Jr., Kevin Harvick and Roush-Fenway drivers Greg Biffle and Matt Kenseth haven’t been very strong since the Chase started. They cannot afford to have anything go wrong and need the leaders to stumble or today’s race could be the end of their championship hopes. Biffle’s No.16 team has already changed their goal from championship to just trying to make it to the top five.

Jeff Gordon is tenth in the points, 48 points back, however, Gordon’s performance has been solid. After getting caught up in a crash at Chicagoland, race 1 of the Chase, and finishing 35th, Gordon followed it up with second and third. The No.24 team were very happy with their car on Saturday and are very confident about Sunday’s race. Gordon will start sixth in the Good Sam Roadside Assistance 500.

The feeling in the garage area is that there will be a shake-up in the points and that we will have a lot to talk about on Monday.  Roush-Fenway must step up their performance and RCR needs to find what they are missing to have any chance at moving up in the standings.

Roger Holtsclawhttp://www.nationalmotorsportsnetwork.com
Roger has over 24 years experience as a mechanic and crew member in NASCAR at many levels including Cup, Nationwide and Truck Series. He has also competed as a driver at many short tracks around the Southeast including one start the USAR Hooter's Pro Cup Series. Roger is now embarking on a motorsports journalism and photography career and is co-owner of HMP Photo. Follow me on Twitter @rogerholtsclaw Email me: roger@speedwaymedia.com
Previous article
RCR Post Race Report – NCWTS fred’s 250 Powered by Coca-Cola
Next article
Fans Can Register to “Win Camaro ZL1”