Start Number 300 the Charm as Parker Kligerman Wins at Talladega 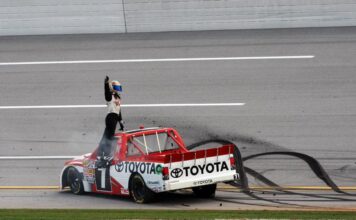 [/media-credit]Talladega, AL (Oct. 7, 2012)- NASCAR Camping World Truck Series start number 300 for Red Horse Racing was the charm for driver Parker Kligerman and the No. 7 Toyota Tundra team at Talladega Superspeedway on Saturday. Rebounding from an unscheduled pit stop to replace a faulty battery with less than 20 laps to go, Kligerman made a power move to charge back to the front with just a few short laps remaining to capture his first career series win in the fred’s 250 powered by Coca-Cola.

Practicing in the draft for most of the practice session on Friday afternoon, Kligerman reported that his Red Horse Racing Tundra was working well when he was either leading or pushed up behind another truck, and was pleased with the overall speed and handling. Crew chief Chad Kendrick and the No. 7 crew dialed in their machine for qualifying, helping Kligerman take the ninth starting position.

After coming down pit road under the caution to get two right side tires and fuel, Kligerman was shuffled to the back of the pack due to a hang up on the right front tire. He then found his other Red Horse Racing teammate, Bodine, who gave him a push back up into the pack. Another caution on lap 48 gave Kligerman a chance to get new left side tires to match the rights, restarting with 44 laps to go in the 14th position.

A collection of close calls followed the No. 7 team just shortly after the restart, as Kligerman jumped on the radio and reported a vibration underneath his Tundra. Fortunately, the fourth caution period of the evening came just 10 laps later, giving Kendrick and his crew time to diagnose the issue. After receiving four fresh tires from his crew, Kligerman returned to competition near the tail end of the field and worked his way up and into the top-10 before the next caution on lap 76. However, during his run back to the front, Kligerman also reported a battery issue that had shut down all of his gauges. The team was forced to bring their driver back down pit road once again for an unscheduled stop under the yellow to change the battery and give their Tundra enough power to make it to the finish.

Taking the restart from the tail of the field once again after the extended stop for the battery change, Kligerman took a chance and hooked up in a tandem draft with another competitor, pushing him straight to the front of the pack in just two short laps. The two trucks overtook the majority of the field in one fell swoop around the outside line and Kligerman held on to the runner up position until the caution came back out for a spin for the sixth time.

On the lap 88 restart Kligerman started on the outside of the front row and had teammate Timothy Peters lined up on his Tundra’s back bumper, ready to push both of the Red Horse Racing machines to the lead. Kligerman held strong as he and Peters were split up as the laps wound down, staying within striking distance in the top five. With a push from behind, Kligerman pulled around the outside of the leaders just before the white flag was displayed. As an accident unfolded at the tail of the field behind him in the final turn, Kligerman stayed true and pulled across the finish line to claim his first career NASCAR Camping World Truck Series victory.

“It’s been a long road to get to this victory. Driving for two different teams and going through a lot of adversity was hard, but I’m blessed to be at Red Horse Racing and working with the best people I’ve ever worked with and raced with. It starts at the top with Tom DeLoach and it just follows through with this entire team that we assembled mid-season to go after this championship. To come over here to Red Horse and have a reinvigoration of my career after what’s happened at the beginning of this season, I just can’t thank everyone there enough for giving me that confidence.” Kligerman said as he praised his crew.

“It was just a matter of time before we’d get that first win and I probably never dreamed that it would happen here just because I haven’t finished a superspeedway race without incident in a few years. I’m happy to have it happen here at Talladega and just proud of this whole Red Horse Racing team.”

Kendrick was proud to be a part of his driver’s first career victory, and foreshadowed plans of many wins in the future.

“Before today started, I kind of told a lot of people I didn’t really like superspeedway racing, but right now I kind of like it a lot. I don’t want to be known as the guy who just wins the superspeedways, I want to be known as the guy who can win anywhere. But I’m proud of this team and our driver has such a great talent. It’s special to be a part of his first win. I think now that Parker has got that first win behind him we’re going to really turn it on now, and I know we can win anywhere, so I’m looking forward to that.”

“A win on the 300th start makes it really special. The other thing that’s really special is every driver that we’ve had at Red Horse this year has won. We’ve got five wins among four drivers, so it’s pretty special that everybody that comes here wins. The combination of a very good organization with very talented drivers is magic. This is also a magic superspeedway truck, it won Daytona with Timothy Peters in 2010, it won again at Daytona earlier this year with John King and it just won again with Parker.”

Kligerman’s win placed him back in the fourth spot in the championship point standings, now 34 markers behind the lead. Teammate Timothy Peters held his ground towards the front as the melee unfolded around him on the final lap, taking home fifth place in the No. 17 Red Horse Racing Tundra. Showing speed in his Toyota Care Tundra early, Todd Bodine and the No. 11 Tundra were taken out of contention on lap 47 when another competitor shot across the track and into the right side, leaving Bodine a 33rd place finish. The NCWTS teams will take a few weeks off before traveling to Martinsville Speedway for the Kroger 200 on Saturday, October 27th. Coverage begins live on SPEED at 1:30 pm EST.

Founded in 2005 by former Mobil Corporation executive Tom DeLoach and NASCAR veteran Jeff Hammond, Red Horse Racing aims to be a professional racing team that strives for excellence on and off the race track. Red Horse Racing hopes to build and maintain solid, mutual relationships with its partners to win races and championships and to represent itself in a professional manner. The team has 10 victories and eight poles in its brief existence. DeLoach and Hammond also own Performance Instruction Training (PIT), the number one pit crew training center in the world that also has many corporate training options that include team-building, lean manufacturing, motorsports demonstrations and more.