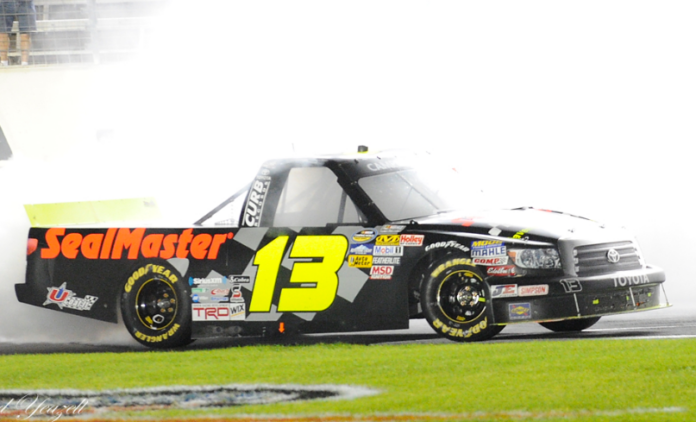 [/media-credit]Johnny Sauter won Friday nights NASCAR Camping World Truck Series WinStar World Casino 350 at Texas Motor Speedway.  Sauter took over the lead with 11 laps remaining and captured his second win of the season (both at Texas) and the sixth of his career.

“We’ve had the truck to beat I felt last week and just had a lot of bad luck this year quite frankly.  Toyota had a great week down in San Antonio at the Toyota Tundra plant down there.  Say, ‘Hi,’ to all of those people down there.  Just an awesome performance.” Sauter said.

Parker Kligerman only took two tires on his final pit stop and could not hold off Sauter for the lead.  Kligerman finished second.

“I hate finishing second man — so does this truck.  This truck is 001, the one of the first of the new trucks Red Horse built, the new generation.  Every time we’ve run it we either finished fourth or second.  It wants to win so bad, but sadly this is probably its last race.” Kligerman said.

Chevrolet clinched the 2012 NASCAR Camping World Truck Series Manufacturers’ Championship with Piquet Jr.’s third place finish.  Chevrolet has captured the prestigious title for the eighth time since the 1995 inception of the Series.

Dillon’s fifth place finished moved to within 15 points of the series points lead after current points leader James Buescher finished 11th, after he reported a vibration about midway through the race and contact from Matt Crafton on the restart after the second caution flag.

“It could have been worse.” Buescher said. “I thought we were controlling our own destiny tonight and we got run into on a restart.”