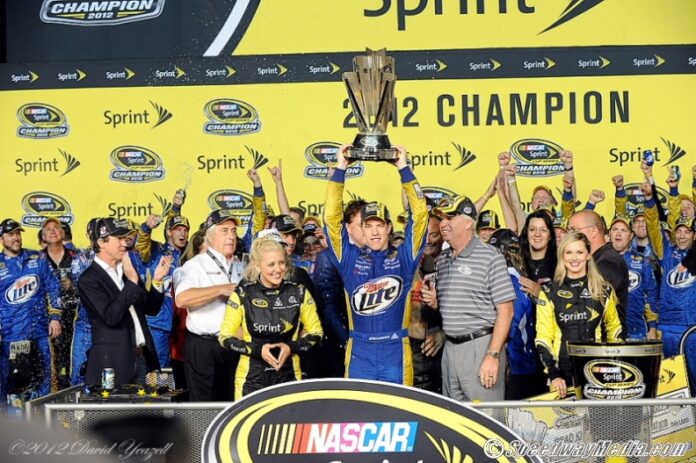 [/media-credit]At the end of the 400 mile finale at Homestead-Miami Speedway, NASCAR would see a new champion crowned in the form of Brad Keselowski.

Though it wouldn’t just go as simple as everyone thought as at one point, Jimmie Johnson looked to have the advantage through strategy.

“They were throwing everything they could at us,” Roger Penske said afterwards. “It’s something I can’t hardly believe right now.  I played this race in my mind over the weekend so many times what could happen yes or no.”

“It wasn’t going to be easy, and we weren’t in the best situation we wanted to be in,” crew chief Paul Wolfe added. “But like I said before, part of that is just — I wish we had a little more speed in our car tonight.  I thought we would have.”

Keselowski admits that he was stressed at that moment because the right call was to pit under caution when Keselowski didn’t. Johnson did and it looked to be the advantage.  However, Johnson would have a problem on a late race pit-stop with dropping a lug nut, followed by a gear problem a couple laps later.

“I guess when Jimmie lost that lug nut, I said someone gave us four aces right there in our hand, so what we need to do is be sure we didn’t drop them,” Penske said. “But I just want to thank Paul for the great job he’s done in building this team.”

Keselowski added that he was glad they got back to 15th so they wouldn’t have to hear the “what if” scenario.

Some critized crew chief Paul Wolfe for not playing the same strategy of the No. 48, which was the winning strategy as played out by Jeff Gordon. However, Wolfe said that they were playing it smart.

“At the end of the day, regardless if the 48 went to the garage or not, we were able to overcome that by taking the four tires and pitting twice for fuel and being able to work our way back up to 15th,” he said.

A couple years ago when Keselowski signed with Penske Racing, nobody expected that they’d have this success in three years, or that the “Bad Brad” was “Penske Material”. However, Keselowski knew he was from the moment he met with Penske.

“I knew from that moment what level of commitment that Penske Racing had to the sport,” he said. “And all the pieces were there to be successful, and the fact that RP spent the time with me to — he didn’t have to talk to me.  How old was I then, 23, 24? He didn’t have to do that.  You had just won the IndyCar championship that year — I can’t remember, I think you won the 500 that year.  I remember that because I saw you and I said, “congratulations, 500 winner.”  I think Helio had just won it.  He didn’t have to talk to me, he just won an Indy 500.”

Keselowski said he knew that they could win races together, it was all about putting the puzzle together. In the span of three years, they have done that by finding the right combination with Paul Wolfe and Keselowski, along with other key people within the organization.

Keselowski has also grown as a driver since then, changing his style on track from being overly aggressive.

“I was trying too hard to be the I in team, and there is none, and that’s pretty obvious looking back now,” he said. “But I didn’t know that.  I do now. But it’s not until you have a group around you that shows you that you don’t have to do all the work, that you can share it, and that as long as you respect them, care about them and work with them, you can be successful.  And that’s something I had to learn on my own.  I never had anybody teach me that.  Nobody ever taught me about teamwork.  That’s something I had to learn on my own.”

Moving forward, Keselowski says this is just the start of what is to come.

“I feel like this team with these two people sitting next to me that we can do anything we set our mind to if we work together like we have over the last few years,” he said. “I really do.  And I just feel so fortunate to be where I’m at right now in life and with racing, to have guys like this around me because you’re a product of who you surround yourself by, and I’m surrounded by the best.”

Though for now, in moving forward representing the sport, Keselowski says to “expect the unexpected.  That’s my MO, right?”