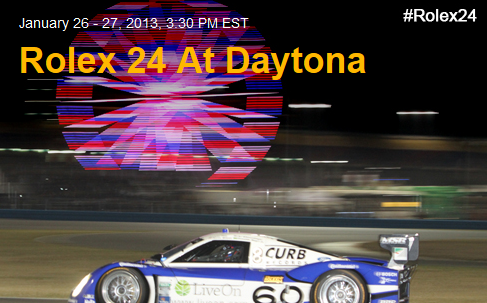 CORNELIUS, N.C. – Michael Waltrip Racing owners Rob Kauffman and Michael Waltrip announced today they will race in the 51st annual Rolex 24 at Daytona on Jan. 26-27. Joining the pair behind the wheel of the Grand Am version of the Ferrari 458 GT that will test in Daytona this weekend will be NASCAR Sprint Cup driver Clint Bowyer and road racing veteran Rui Aguas.

“The Rolex 24 at Daytona is the pinnacle of sports car racing in America and a world class event with huge historic relevance,” said Kauffman. “We made it to the finish last year in our first attempt. The GT category is large and strong this year, but we are going to give it our best shot. You have to be in it to win it.”

The AF Waltrip entry is a joint project of the Italian championship sports car team AF Corse and MWR. AF Waltrip fielded Ferraris for Waltrip and Kauffman at sports car races around the globe since 2010 including the 24 Hours of Le Mans, Sebring and last year’s Rolex 24 in Daytona.

Waltrip, a two-time Daytona 500 champion, said the Rolex 24 should be on every race fan’s bucket list.

“Daytona is always special whether it’s the 24 Hours or the Daytona 500,” he said. “Last year was my first year in the Rolex 24 and it was so cool. The road course is awesome. During the day you can see families walking around the infield taking in all the sights and at night the place comes alive when the Ferris Wheel and all the race cars light up. The drivers are having fun and the fans are having fun.”

Bowyer will be the newest member of the AF Waltrip driver lineup that has included Travis Pastrana and Brian Vickers in previous races.

“I’m not really sure what I got myself into,” laughed Bowyer who won three races and finished second in the 2012 Chase for the NASCAR Sprint Cup driving for MWR. “Rob asked me to race and I said I would do it. Everyone has told me how much fun this race is. So, I’m ready. Running 24 hours is a long time, but we will give it our best shot.”

MWR’s participation in international racing events is part of a worldwide business strategy and a way to promote the team on a global stage. MWR’s international effort has included visits to Le Mans, the Goodwood Festival of Speed in England, Toyota Motorsports Festival in Japan as well as appearances in Dubai, Bahrain, Shanghai, Spa, and Road Atlanta among others. The AF Waltrip team finished 22nd in the GT Class in the 2012 Rolex 24.

The famous twice-around-the-clock challenge kicks off the international motorsports calendar, as well as the GRAND-AM Rolex Sports Car Series and features a star-studded line-up of drivers from around the world battling on Daytona’s demanding high-banked road course.