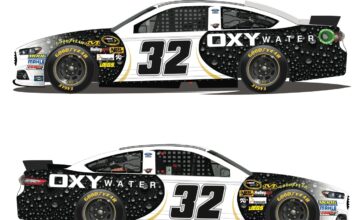 MOORESVILLE, N.C.  (March 12, 2013) – FAS Lane Racing is proud to announce a new three year sponsorship agreement with OXYwater™.    The Ultimate Healthy Hydration Beverage will be the Primary Sponsor on the No. 32 FAS Lane Racing Ford for 24 NASCAR Sprint Cup Series races this season and continue for the entire 2014 and 2015 seasons.  The No. 32 OXYwater™ Ford will debut this weekend in the running of the Food City 500 at Bristol Motor Speedway with two-time NASCAR Sprint Cup Series Champion Terry Labonte behind the wheel.

“OXYwater™ is a dynamic young company that features an oxygen-enhanced mineral water,” stated FAS Lane Racing owner Frank Stoddard. “We are a young race team and are very proud that OXYwater™ has chosen us as their NASCAR marketing partner. Proper hydration is very important for our drivers, team members and our race fans. Through this partnership we look forward to introducing OXYwater™ to the NASCAR fan base and growing our businesses together.”

“OXYwater™ has zero sugar, zero calories, zero carbs and no artificial sweeteners and is clinically proven to be more effective than plain tap water at reducing the level of dehydration during exercise,” said Stacey Kuzda, Vice President of Marketing for OXYwater™.  “Our partnership with FAS Lane Racing is the cornerstone to our marketing program designed to promote OXYwater™ as the ‘Ultimate Healthy Hydration Beverage’.  We are honored to join the ranks of the many fine companies that have become NASCAR Sprint Cup team sponsors and are very excited to be a part of the FAS Lane Racing Team.”

The running of the Food City at Bristol Motor Speedway will run this Sunday March 17th at 1:00 p.m. ET.    The race can be viewed LIVE nationally on FOX and heard on affiliated PRN radio stations and on Sirius XM NASCAR Radio 90.

About OXYwater™: OXYwater™, headquartered in Columbus, OH is a functional enhanced beverage that began distribution in September 2011.  Owned and operated by Imperial Integrative Health, OXYwater™ is a first to market product that has harnessed added oxygen, B vitamins and electrolytes to deliver a refreshing healthy boost of energy without sugar, calories or carbohydrates.  The company’s flavors include Passion Berry, Peach Mango, Island Citrus, Cherry Pomegranate, Pink and Black. OXYwater has created partnerships with organizations such as the American Red Cross and the Alliance for a Healthier Generation.

About FAS Lane Racing:  FAS Lane Racing is led by Frank Stoddard, one of the top crew chiefs in NASCAR’s history.  The team fields the No. 32 Ford in the Sprint Cup Series.  In the team’s first two seasons, they have finished in the top 35 in the series point standings.  The 2013 driver line up includes, two-time Sprint Cup Series Champion Terry Labonte, veteran Ken Schrader, and Rookie of the Year contender Timmy Hill.  For more information on FAS Lane Racing, visit www.FASLaneRacing.com.