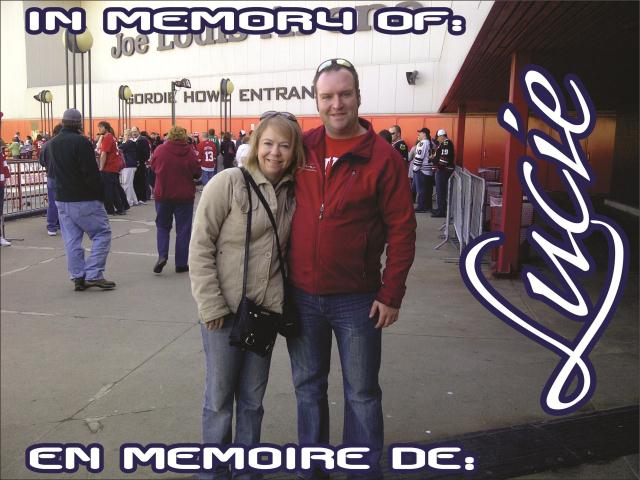 By Clayton Johns (@cjohnsmedia) – The 2013 edition of the OSCAAR Super Late Model tour is finally upon us, and most fans couldn’t be more excited. This season is one of the most anticipated since the series’ inception in 1990. Much of the reason for the hype surrounds the level of competition. Most enthusiasts believe as many as 15 different drivers have a chance to win on any given night, but that number goes as high as 20.

Sunday marks the second annual Lucie Aylwin Memorial at Sunset Speedway. Lucie was among the victims of the Elliott Lake mall collapse last May. She is described by many as a kind-hearted soul who would take the time to talk to anybody, doing so with a smile on her face.

The memorial race was initiated by her fiancé Gary Gendron, who was a member of George Wilson’s racing crew for the past few seasons. As Gendron explained, Lucie never felt she was above anybody and, as a social worker, was always happy and willing to help in any way she could.  Gendron has created a brand new trophy to be awarded for the first time this weekend. Brandon Watson won the first memorial race in Lucie’s honour.

Reigning series champion Watson (#9) will compete at Autodrome Chaudière (QC) on Saturday before making a ten hour haul in order to be back at Sunset for the opener. The youngster won twice at Sunset last season, his former home track. Uncle Glenn Watson (#22) was shutout of victory lane last year despite seven wins in 2011. He’s especially hungry to get back there in 2013 and will come back with a vengeance.

Jesse Kennedy (#10) and Gary Passer (#13) both won races in 2012 and should be in tight competition for a top-ten finish Sunday evening. Kennedy battled mechanical failures at Sunset last year on a couple of occasions, but is hoping to have rectified those problems.

Shane Gowan (#39) returns to the tour after a one-year hiatus last season. Gowan destroyed the front-end of his car in the first heat of opening night in 2011. Evidently, the Lucas Oil team will hope to go home in one piece to start the year.

Tyler Hawn (#42) will debut a brand new car as well. The Oro Station, Ont. native is beyond excited to pilot the best equipment he has ever owned.  Look for a new paint scheme this year on the Fox’s Bakery Camaro.

Let’s not forget about Rob Clarke (#49) either. Clarke is a five-time champion of the series who won at Delaware last year and Sunset two seasons ago. He will drive a car that has only been raced a half-dozen times and is almost sure to be near the front on opening night .

And what about 2007 champion Derrick Tiemersma (#7)? He will once again feature his traditional white paint scheme. With a championship under his belt, Tiemersma is more interested in finding victory lane this season.

Add Mike Beyore (#54) in to the mix as he looks to solve his engine woes by returning to a McGunigill spec engine.

This season’s rookie class looks as though it will be the most competitive in recent years, and perhaps all time. Former Delaware Speedway regular Andrew Gresel is debuting a completely new car #81. Gresel competed at Daytona Int’l Speedway in February in the competitive ARCA series.

Kevin Cornelius’ #17 is the first ever Super Late Model to come from London, Ont.-based McColl Racing Enterprises. Cornelius knows his way around Sunset, as he was the 2011 Limited Late Model track champion. He should be in contention for a win on Sunday.

Meanwhile, Sean Cronan will make his first OSCAAR start in car #8. Cronan was the 2011 McColl Summer Series champion at Sunset, so he will feel right at home in his first start. Cronan’s car is the same chassis formerly piloted by Jeff Dunford. Terry Snyder remains car owner.

With no clear favourite for the season opener, this Sunday is a race no OSCAAR fan should miss. Spectator gates open at 4:30pm, with the first green flag scheduled to fly at 6pm. Pit gates open at 12:30pm for competitors. The Super Late Models will be joined by the OSCAAR Modifieds and Can-Am TQ Midgets.

Jeff Dunford has divested his part ownership of the Super Late Model he drove over the past number of seasons. Terry Snyder was the other part owner, buying Dunford out of his portion. Dunford, however, stressed it was not due to any disagreement between he and Snyder. “There were no problems between Terry and I. The decision was purely for financial reasons,” explained Dunford. “I want to thank my friends and competitors for everything over the last few years.” He also stressed he hopes to return to the series in the near future.

Canadian recording artist Lucas Rogerson will perform his rendition of O’Canada this Sunday to open the 2013 OSCAAR Racing season. Rogerson is a long-time member of the Settlers Creek band and is in the process of beginning a new solo career. His first solo album, ‘Streetlights’, is set to release next Wednesday, May 22. It will be available on iTunes and can be pre-ordered now. OSCAAR Modified driver Davey Terry has been instrumental in the process of having Rogerson perform this evening. Despite the friendship, Rogerson has never been to a stock car race. “I’m expecting excitement. I’m excited to see the cars. I never realised how much thought goes in to the cars. I’m excited to see the crowd,” he said. You can check out the duo’s promotional video here: https://www.youtube.com/watch?feature=player_embedded&v=ADsrZThXnDk