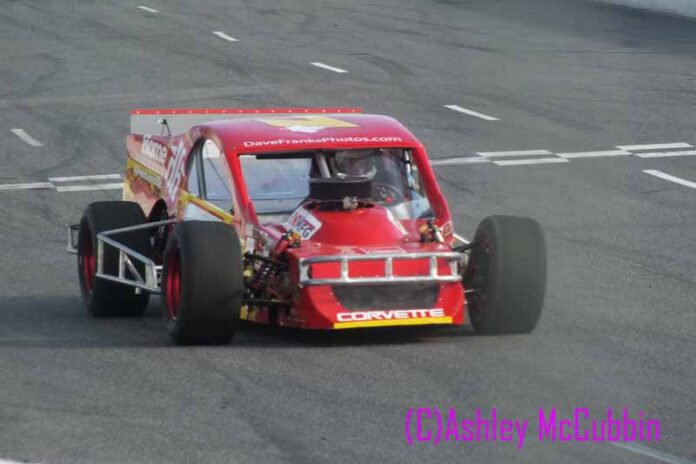 After an incredible first season, the OSCAAR Modifieds return this year with more excitement behind them than last year. After last year’s success, many drivers have stepped up to the plate over the off-season, purchasing cars to join the ever-growing line-up of drivers.

The driver that they will all be trying to upset is Gary McLean after McLean dominated last season on the way to the championship. McLean opened up last year with a win at Sunset, and will look to do the same this weekend.

Though looking to stop him and keep it within the family is cousin Brent McLean, who enters his third year of modified racing. McLean had a successful season last year, finishing second in points.

Heading to the new season, McLean has the same goal as always – win races and go for the championship. He adds that he wants to build on the momentum from last year, by getting a few more wins and trying to be consistent week-in-week-out. He also has some unfinished business at one of the tracks after getting taken out in an early race accident.

“I’d have to say Barrie,” he said earlier this year in talking about what track he wanted to get back to most. “Last year we had got taken out early and didn’t really get to show all of our stuff. Other than that I’m looking forward to all the tracks and showing what the No. 7 has in store.”

Gary and Brent McLean will be joined once again by Brian McLean, who also ran strong last year, picking up a victory at Peterborough in August. The McLeans took all the victories – except one – so they are the ones to beat.

Hoping the spoil the family fun is sophomore driver Davey Terry, who almost pulled off the win last season at Sunset Speedway’s Velocity 250. Terry had an incredible rookie season, finishing third in points after finishing top 10 all but two nights. Terry goes into this season with one “plain and simple” goal in mind – to win.

“It’s a fairly reasonable goal that will result in one hell of a party when it’s met,” he said earlier this year.

Fellow sophomore driver Matt Barton has committed to the first six events of the season after having a successful season last year.

After some solid top 10 runs in his rookie year last year, Josh Gruntz is returning in 2013, looking to be even more competitive.

After suffering some bad luck last year, Tim Burke is back to give it another go. He was competitive last year when he wasn’t being bit by the bad luck bug, so look for him to run upfront each week.

Former Delaware Speedway weekly racer Justin Demelo returns to OSCAAR for another season as he looks to lock down more solid finishes.

One of the families known to be many Ontario racing fans – Burrows – is set to run some OSCAAR events this year once again. Registered drivers include Beau, Bill, Chris, David and Jamie.

While there are many drivers entering this season with experience, there are also those who enter the season with lots of inexperience. OSCAAR has listed that potentially 11 new drivers could see action this season, with at least half committed to 75% of the schedule or more.

One of those is Bobby Tolton, who brings his experience in mini stocks and late models to the OSCAAR Modified ranks.

“I’m extremely excited heading into this season, with all the time and effort the crew and myself have put into getting the car all geared up we have nothing but high hopes,” he said. “We’re new to the series and we just have to go out and keep our nose clean and earn respect.”

Dave Osbourne made his OSCAAR modified debut at Autumn Colors and plans to attend every OSCAAR event, except the Friday night events at Delaware Speedway.

Third generation driver Branden Bullen will be behind the wheel of the No. 67jr that he debuted at the Fast and Furious Motorsports show in Bowmanville, Ontario. He made his debut last year and looks for more this year.

Sunset Speedway Super Stock competitor Lane Zardo will make his OSCAAR Modified this Sunday at Sunset. He will be driving a car owned by George Woods out of Elmvale that has ran at Varney Motor Speedway in the past.

Known for side-by-side, edge of your seat action and their unique flavor of racing, this is one series that I promise you will be glad to have seen live yourself. So get out to Sunset Speedway this week and join in the fun.