Surprising and Not Surprising: Samuel Deeds 400 at the Brickyard 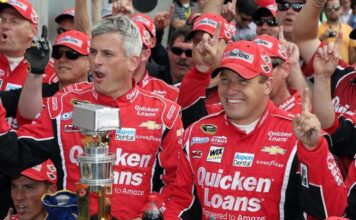 At one of the most historic tracks on the NASCAR Sprint Cup venue, here is what was surprising and not surprising in the 20th running of the Crown Royal Presents the Samuel Deeds 400 at the Brickyard Powered by BigMachineRecords.com.

Surprising:  It is not often that Chad Knaus, one of the best crew chiefs in the business, gets outfoxed, however he surprisingly did at the Brickyard by none other than Matt Borland who won his first race since being reunited with driver Ryan Newman.

Borland made the gutsy two-tire call with just eleven laps left in the race to score the kissing of the bricks for his driver and the team of the No. 39 Quicken Loans/The Smurfs Chevrolet.

“Matt Borland just made an awesome call,” Newman said. “I have won more races with him on old tires and out of gas than I have with four tires and the best car.”

This was the first win of the season for soon to be unemployed driver Newman and the first win at the Indianapolis Motor Speedway for his team, Stewart-Haas Racing.

“We were finally able to get everything right on race day.”

Not Surprising:  Five-time champ Jimmie Johnson was disappointed but not surprisingly gracious in defeat. And the driver of the No. 48 Lowes/Kobalt Tools Chevrolet did not even throw anyone under the bus in the process.

“Second is never fun especially at the Brickyard,” Johnson said. “Bummed out with that, but stuff happens.”

“I believe the No. 39 took two (tires) as well where we took four (tires),” Johnson continued. “I don’t fault the call by any means.”

Surprising:  Matt Kenseth, driver of the No. 20 Home Depot Toyota for Joe Gibbs Racing, was the highest finishing Camry, taking the checkered flag in the fifth spot. But even with that good run, Kenseth admitted that he had nothing for the surprisingly fast two-some of Ryan Newman and Jimmie Johnson.

“They were way faster than us and they were up there pretty far,” Kenseth said. “Jimmie went by me so quick that I thought he was going to suck the numbers off the doors.”

“Ryan had a really fast car,” Kenseth continued. “We had a top-10 car most of the day, but I couldn’t run with those guys.”

Not Surprising:  Hendrick horsepower ruled the day at the Brickyard, with six of the drivers in the top-ten having that power under their hood. One of those drivers, Kasey Kahne even credited team Hendrick power in the engine of his No. 5 Great Clips Chevrolet with his third place run.

“Doug has led by example from his first day with us,” Mr. H. said “He understands the importance of relationships and has helped promote a culture of teamwork and communication.”

Surprising:  Dale Earnhardt Jr. pulled off a surprisingly good finish, in fact a sixth place finish, in spite of troubles on and off the race track. The driver of the No. 88 National Guard Chevrolet battled a loose wheel at the start of the race and troubles with the car running at the end of the race, as well as coping with the loss of his uncle Randy Earnhardt, whose death Junior learned of while at the track.

“The car was shaking real bad,” Earnhardt Jr. said. “Steve (Letarte, crew chief) is a good strategist and we ended up alright.”

“Randy was always there,” Junior said of his uncle who passed away. “It is just very, very sad but I am glad his suffering is over with.”

“I loved him dearly and will miss him a lot.”

Not Surprising:   Kurt Busch has been running so well as of late that, not surprisingly, he was distressed with a top-15 finish. The driver of the No. 78 Furniture Row/Beautyrest Chevrolet finished the race in the 14th position, which was exactly where he stood in the point standings when the race was over.

“The 14th place finish is unacceptable,” Busch said. “We’ve accomplished a lot thus far this season, but one area we need to improve upon is finishing strong.”

“No question we have to run better than we did today if we want to get into the top-10,” Busch continued. “We need to have strong finishes in the next six races.”

Surprising:  Brad Keselowski was the biggest Indy loser, falling four spots in the point standings to 13th with his 21st place finish in his No. 2 Miller Lite Ford.

“That was definitely not the day we wanted,” Keselowski said. “We weren’t a 21st place car.”

“It is just the way things worked out,” Keselowski continued. “That has been the story of the year.”

Not Surprising:  With a hard fought battle, Jeff Gordon bounced back into the top ten in the point standings with his top ten finish in his No. 24 Pepsi Max Chevrolet at the Brickyard.

“You had to fight extremely hard in this race,” Gordon said. “It was just pit strategy and speed in the car and traffic.”

“It was not easy I can tell you that.”

Surprising:  There is a surprisingly tight Sunoco Rookie of the Year battle going on at present, with Ricky Stenhouse, Jr. leading by just nine points over Danica Patrick in the ROTY standings.

Patrick, however, did not help her case with her 30th place finish at the Brickyard, although her ROTY competitor Stenhouse Jr. did not fare much better, finishing 25th.

“We tried something, it just didn’t work, and that’s that,” Patrick said. “It just was what it was.”

“It would have been nice to have a better day than this and be able to march forward,” Patrick continued. “We just didn’t and that’s just all there is to it.”

Not Surprising:  With the lack of passing on the track, it was not surprising that many were calling for some changes, including driver Carl Edwards, who finished 13th in his No. 99 Fastenal Ford Fusion.

“When you rely on down force and your car is going 200 mph and everything has to be perfect and there is a car up there in front of you that disrupts that air, it just becomes difficult,” Edwards said. “I don’t know that there is a fundamental problem with the car but I would be really curious to see what no front splitter and a really tiny rear spoiler would do.”

“I think it would allow Goodyear to make a tire that is softer so it would fall off more and I think you would see those great races.”