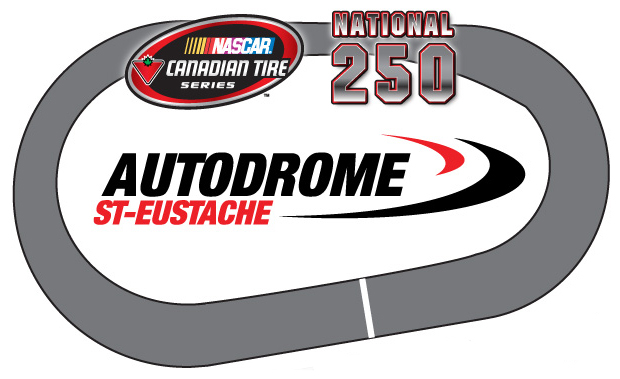 Riding a series career-best oval finish of 5th last week at Auto Clearing Motor Speedway in Saskatoon, Saskatchewan during the Western Swing, Montreal’s Alex Tagliani fully intends to bring that momentum back to his home Province!

The 2014 NASCAR Canadian Tire Series presented by Mobil 1 returns to Quebec for the third of four events in La Belle Province with the National 250 under the lights on Saturday July 26th at Autodrome St-Eustache.

As the NCATS season schedule hits the half-way mark, Tagliani, the Canadian NASCAR/IndyCar and SportsCar racer, race winner and former Indianapolis 500 pole sitter, knows he can build on the top-5 in Saskatoon at the tight and tough .4 mile oval at St. Eustache, just west of Montreal, at the buttons of his # 18 Team EpiPen/Peanut Free Zone/Dicom Express/Tagliani Autosport Dodge Challenger…

“I’m really excited about this next race at St. Eustache! The Peanut-Free Zone # 18 was very strong on the ovals during the Western Swing. We just have to stay away from the chaos that can happen at the end of these races. We’ll have a new car at St. Eustache and a new car at Trois Riviere! New design, new colours, so I’m looking forward to the next couple of weeks!”

“Tag” has a win, five poles, six top five’s and an additional two top 10’s in 20 career NCATS starts. The win was scored at Edmonton City Centre Airport in 2008.

The National 250 at St. Eustache will finish off an intense bundle of four events in twenty one days that started at Circuit ICAR Montreal on July 6th, Edmonton on July 11th where Tagliani earned his fifth series pole, and Auto Clearing Speedway in Saskatoon July 16th.

Following the National 250, The NCATS runs again in Quebec for the JuliaWine.com Le 50 Tours at Quebec’s Circuit de Trois-Rivieres August 9th and 10th. The NASCAR Canadian Tire Series has been a major participant in the three-day Grand Prix Trois-Rivieres festival, held on the 1.53-mile street course, every year since 2007.

Tagliani’s NCATS entry is partnered as a brand ambassador with Pfizer Canada Inc., the Canadian distributor of The EpiPen® epinephrine auto-injector. Alex lives and races with a severe allergy to nuts, and carries the allergy awareness/Pfizer/EpiPen message across Canada through his NCATS racing program.

Also partnering with Alex in The Tagliani Autosport venture this season is long-time business associate Colin Livingston, President of CanTorque Incorporated of Edmonton Alberta.The Tagliani Foundation is a non-profit foundation dedicated to helping charitable and educational organizations by donating funds raised to aid with organized programs internationally. Our goal is to raise awareness, educate and help those in need, with emphasis placed on initiatives that affect individuals at risk of anaphylaxis.

To raise additional funds for Anaphylaxis Canada, The Tagliani Foundation is staging a Golf Classic and Gala at Celine’s Le Mirage in Montreal September 30th.

For more information on the Foundation: TaglianiFoundation.org