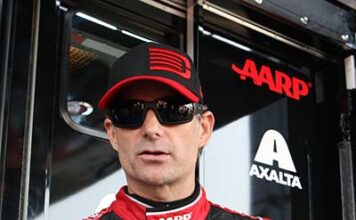 In 2014 Jeff Gordon had not won a pole but led the Sprint Cup Series points.  Last week Gordon won the pole at Watkins Glen and was ecstatic. This weekend in Michigan Gordon broke the track record in the final session of qualifying with a lap of 206.558 miles per hour. The speed is the seventh fastest qualifying speed in NASCAR history and the only one not on a super speedway. It is Gordon’s sixth pole award at Michigan and the 76th of his storied career.

“It’s a team effort,” Gordon said. “ You’ve got to give your input. Those guys are just really smart and making great decisions. We’re trying to catch these Penske guys and the Stewart-Haas guys in qualifying on these big, fast ovals like this. We obviously made some improvements. This is a really good race car. This is our Brickyard 400 car, so it’s a fast one. And let’s hope we can keep it going fast all day on Sunday.”

When asked if he knew the car would be that fast he said, “I knew that we were really strong here the last time we were here and what our team is doing right now, it’s just phenomenal how they continue to improve race cars and just the whole effort. I’m just so proud of them. You don’t go around this place like that, that fast, without a really good race car.”

Joey Logano will line up outside Gordon on the front row. In fact, Ford took up three of the top five spots with Carl Edwards and Brad Keselowski qualifying third and fifth.

“That is our seventh front row start this year,” Logano said. “We are very proud of it, don’t get me wrong. It takes a lot of effort to do that but we only have one pole. That is frustrating. That means that is a lot of second place starting positions. We were close again and just weren’t able to do it. I have a really fast Shell Pennzoil Ford this weekend and we have been able to keep showing Penske is very strong in qualifying. We are making all the sessions besides the superspeedways and we are proud to have done that this deep in the season. I have a good car in race trim too. I feel like I have something similar to what I had in this race last year that we won the pole and race with. We are going to come up a little short on the pole but hopefully we can do it in the race.”

Kevin Harvick, Paul Menard, Austin Dillon, Jamie McMurray and Ricky Stenhouse Jr. rounded out the top ten. Other notables include points leader Dale Earnhardt Jr who failed to make it past the first round in 25th. Jimmie Johnson was 30th. Jeff Burton, driving the No.14 of Tony Stewart qualified 27th.

Ed Coombshttp://www.sportshooter.com/coombse
Ed began covering NASCAR for the former Gater Racing News regularly in 2000. He began working with Speedway Media in 2003 by supplying exclusive photos from the races covered. Currently he is the Editor and Assistant Publisher of Speedway Media. He also manages staff and credentialing. With the closing down of Gater News after nearly 50 years he hopes to become a more regular contributor at Speedway Media as a writer and photographer. My Twitter name is @coombsed feel free to follow me I am a member of the National Motorsports Press Association.
Previous articleChevy NSCS at Michigan Two: Jeff Gordon and Austin Dillon Post Qualifying Transcripts
Next articleIndyCar News and Notes – Aug. 15, 2014