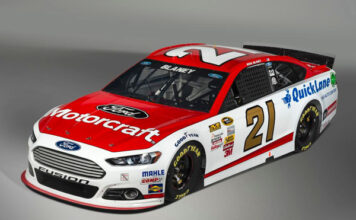 When Ryan Blaney makes his official debut in the iconic No. 21 Motorcraft/Quick Lane Ford Fusion in the 2015 Daytona 500, he will be mindful of his rookie status, but will be looking for ways to get to and stay near the front of the pack.

“I’d like to say being a rookie doesn’t change your thought process but it definitely does,” said Blaney. “You go through it with every new series you go into. You have to give respect to get it. That’s what I’ve always done.”

DEARBORN, Mich., Feb. 11, 2015 – When Ryan Blaney makes his debut in the iconic No. 21 Motorcraft/Quick Lane Ford Fusion in the 2015 Daytona 500 and the events leading up to the Great American Race, he will be mindful of his rookie status, but will be looking for ways to get to and stay near the front of the pack.

“I’d like to say being a rookie doesn’t change your thought process but it definitely does,” said the 21-year-old Blaney. “You go through it with every new series you go into. You have to give respect to get it. That’s what I’ve always done.

“When I started in truck, I gave a lot of respect and I earned it back,” he continued. “Same with Nationwide (now XFINITY Series). Cup is no different.

“That does change how you race a little bit,” said Blaney who has two Sprint Cup starts under his belt heading into his first season with Wood Brothers Racing. “You probably give a little more than you take right away to not get on anyone’s bad side and not mess up in your rookie year.

That being the case, Blaney says he has no intention of being a rolling spectator in Daytona or at any race in which he’s involved. “You have to know when to be aggressive,” he said. “That balancing act is really going to be big for us this year. Being a rookie does change your mind set a little bit but we’re not going to just ride around. When the time is right we’re definitely going to make it count.”

While Blaney is earning respect from other Cup drivers on Daytona’s high banks, new Motorcraft/Quick Lane Team crew chief Jeremy Bullins will be doing the same from the pit box in his first year as a Sprint Cup Series crew chief.

“It’s a super speedway race and there are big packs of cars and it’s hard to pass,” Bullins said explaining what goes into his strategy for Daytona. “You have to focus on track position a lot. You take only two tires when you can. You take gas only if you have an opportunity. It all depends on how cautions fall and what lap it is.”

According to Bullins, pure speed is the primary focus in setting up the Motorcraft/Quick Lane Ford Fusion for Daytona qualifying, the 150-mile Budweiser Duels and the 500 itself.

“The biggest thing with set up at Daytona is you want to get the car down and out of the air with the least amount of drag on the car that you can get away with,” he explained. “Since the track has been re-paved, handling is not a huge part of it like it used to be. It’s more like Talladega where you just try to get speed.”

“It’s a lot narrower, which makes it more difficult to get through the pack if you get behind a little bit,” he said. “There aren’t as many lanes moving forward and it definitely leaves less room for error.

“We’re going to attack it like we did last year at Talladega,” said Blaney, who in his second-ever Cup start there last season for Team Penske finished 22nd after leading several laps early in the race. “We’ll try to win the race and do the best we can to stay up front, be ahead on strategy and make smart moves when we have to and be aggressive when we can. It’ll be a good race for us I think.”

Wood Brothers Racing was formed in 1950 in Stuart, Va., by Hall of Famer Glenn Wood.  Wood Brothers Racing is the oldest active team and one of the winningest teams in NASCAR history. Since its founding, the team won 98 races (including at least one race in every decade for the last seven decades) and 117 poles in NASCAR’s top-tier series. Fielding only Ford products for its entire history, the Wood Brothers own the longest association of any motorsports team with a single manufacturer. Glenn’s brother, Leonard, is known for inventing the modern pit stop.  The team currently runs the Motorcraft/Quick Lane Ford Fusion driven by Ryan Blaney in the famous number 21 racecar.