The inspiration that led to the NASCAR slot machine 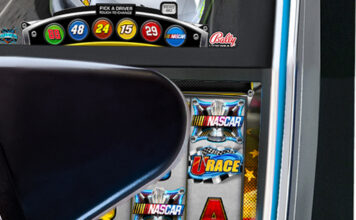 NASCAR is a popular auto-racing sport that gives birth to diehard fans that are intensely loyal to the sport. Bally Technologies began distributing the now hugely popular NASCAR slot machine in 2013, and the slot machine was one of many that began to bridge the gap between traditional spin slots and immersive video games. You can click to view best slot sites at slotsmummy.com, where you’ll be able to find and play this game at to your heart’s content. The slot machine goes beyond the simplicity of player-character interaction and comes equipped with high-quality video cards, 3D engines and complex math making it almost like a video game within the slot machine. Bally Technologies’ game development director Bill Wadleigh (a former video game developer who describes himself as a huge NASCAR fan) worked on creating some of the slot machine’s key attributes mixed with the themes and popular aspects of NASCAR – its racing.

The NASCAR slot machine had to attract both devoted slot machine players and casual NASCAR fans. It did this by creating the interactive Daytona Motor Speedway race and character customisation to a certain driver, due to NASCAR fans’ loyalty towards particular drivers. It had to be careful in its selection of drivers, as they had to remain relevant. Machines such as the NASCAR slot machine offer gamblers scenarios they can control. Boyd Casinos across Las Vegas and the rest of the US introduced the game due to the company’s good relation with NASCAR fans generally. The slot machine designers were inspired to create something new and exciting to the table, as many developers have been gradually creating games based on television shows, movies or pop stars such as Pawn Stars, Bally’s Michael Jackson slots, and IGT’s CSI slots. The connection between traditional slot machines and compelling video games is being pulled ever closer to create memorable and engaging gaming experiences.

Wadleigh also recalled that he was inspired to create one of the bonus games by stating that the slot business was as simple as spinning the wheel of a toy car. This then created the spinning bonus graphic of the NASCAR game, using a tyre of a car as a spinning wheel.  NASCAR is one of the most followed motor sports in America, and with its intense driving and high-octane racing, NASCAR has an inept ability to keep viewers on the edge of their seats at all times – which is exactly how the developers of the NASCAR slot machine wanted their players to be. The slot machine gives fans of NASCAR a chance to enjoy the sport as well as earning some money, and equally attract more fans to the sport, by opening its availability to a wide range of slots fans. With a 32-inch LCD touch screen (rather than the traditional lever pull) and surround sound in the seat to really make the game immersive, it is easy to see that traditional slot machines are rapidly evolving.

There a huge variety of slots available on the market, such as traditional 777 slots, video slots, and slots with progressive jackpots, but arcade-inspired slot machines are looking to be the future of casinos and slot machines. By combining the excitement of casino betting with the thrill of an arcade racing game, you have yourself a winning combination. Tapping into the cultures that people love is a sure way to attract a crossover between gambling and culture, and the NASCAR/slot machine crossover is just one of the most successful ways this has been done.

3 Of The Best Luxury SUVs

Advantages Of Living In Kenya