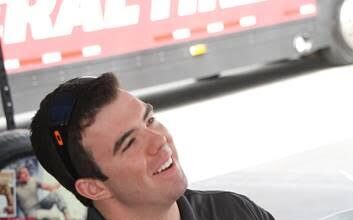 Dean in his No. 32 GREE Cooling Products Toyota Camry was racing for a top-five position when the rear track bar mount broke forcing the Bluffton, S.C. native to make an unscheduled pit stop under green flag conditions where the team had to take their car behind the wall for repairs.

The 22-year-old later returned to the race 34 laps down and finished 23rd.

“Man, this is unfortunate,” Dean said following the Music City 200. “The guys at Win-Tron Racing brought me a really fast GREE car and we were just biding our time and then I started to feel something weird and knew something was wrong and had to bring the car to pit road.

“The guys were able to get our GREE car fixed, but we gave up any hope for a good finish. We’ll get back together at the shop, learn from this and rebound. It’s early in the season and we refuse to give up.”

After practicing 11th quick earlier in the day, Dean and interim crew chief Kevin Cywinski made some adjustments to improve the handling of the No. 32 GREE Toyota Camry. In time trials, Dean posted the eighth quickest lap, picking up nearly three-tenths of a second from his fastest lap in practice.

When the green flag dropped, Dean quickly rose to seventh, but faded back to eighth where he hovered inside the top-10 until he joined the leaders on pit road nearing Lap 50.

With a two-tire stop, adjustments and a load of Sunoco Racing fuel, Dean made a significant charge on the restart and maintained his presence in the top-seven until the track bar failure at Lap 102.

Improving on his 32nd place finish at Daytona International Speedway, the Win-Tron Racing team will charge to Salem (Ind.) Speedway on Apr. 30 for the running of the Kentuckiana Ford Dealers ARCA 200. Dean will make his ARCA debut at the historic half-mile oval.

“Everyone at GREE deserves to see us finishing strong,” added Dean. “We’ve had speed the first two races, just rotten luck. Hopefully, we’ll get the monkey off our back and start focusing on contending for race wins in a few weeks. I want to thank Dave (Pearson), Tim (McDonald) and everyone at GREE for allowing me to represent them. We’ll get it turned around.”

While gunning for the ARCA Racing Series driver’s championship this season, Dean has also registered to be a SCOTT Rookie of the Year candidate aboard the No. 32 GREE Toyota Camry.

In nine ARCA Racing Series starts, Dean captured his first career victory in his second career start at Talladega Superspeedway after starting second in Apr. 2016. Overall, Dean has one top-five and three top-10 finishes and has led 21 laps in ARCA competition.

To learn more about GREE Racing and their expansion into Motorsports, please hop on GREERacing.com or follow them on Twitter @GREE_Racing.

In 1991, GREE set out to make the world a cooler place. To this end, we’ve become a global leader in air conditioners, developing some of the most advanced commercial and residential air conditioners in the world. Based in Zhuhai, China, GREE is now the world’s largest specialized air conditioner company integrating R&D, manufacturing, sales and service. It’s our mission to innovate and create new ways to help people live well and stay comfortable no matter where they live, work or play.

Located in Mooresville, North Carolina, Win-Tron Racing is a professional race team headquartered in “Race City USA.” Owned by former racer Kevin Cywinski, the team will compete for the ARCA Racing Series presented by Menards championship in 2017 with driver Gus Dean in the No. 32 GREE Toyota Camry. The team will also field a second entry in the No. 33 Toyota Camry with Justin Fontaine and others. Learn more at WinTronRacing.com or on Twitter @WinTronRacing.