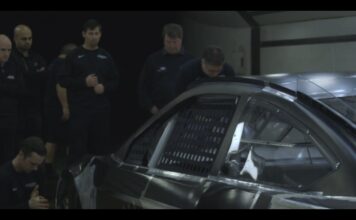 ·         The second in a two-part series that follows the development process of bringing Ford’s iconic pony car, Mustang, to the Monster Energy NASCAR Cup Series, beginning with this weekend’s Daytona 500.

·         Titled, “The Development”, the second video highlights the men who will be behind the wheel of the 2019 NASCAR Ford Mustang, talking about the collaboration between the Ford teams and Ford designers and engineers who developed the next high-performance race car worthy of the Mustang heritage.

One of the key parts of the development process for the new NASCAR Cup Mustang was the collaboration between Ford race teams and Ford Performance engineers to make sure not only was the new 2019 NASCAR Mustang fast but was true to the look and spirit of the Mustangs found in driveways across the world.

“The Ford engineers, working together with the race teams, have come up with a very special piece that we are going to debut here in Daytona. For one, I can’t wait to race because I know it is going to be fast, but it is going to look good in victory lane as well.” – Joey Logano, 2018 NASCAR champion

“This car has been engineered and designed thoroughly, to levels I don’t think we have ever experienced in my time at Team Penske and with Ford Performance. I think we are looking for really big things out of the car and I think it is going to deliver.” – Brad Keselowski

“Mustangs. Muscle cars. That is what needs to be on our race tracks and finally that is what is on our racetrack in NASCAR.” – Clint Bowyer