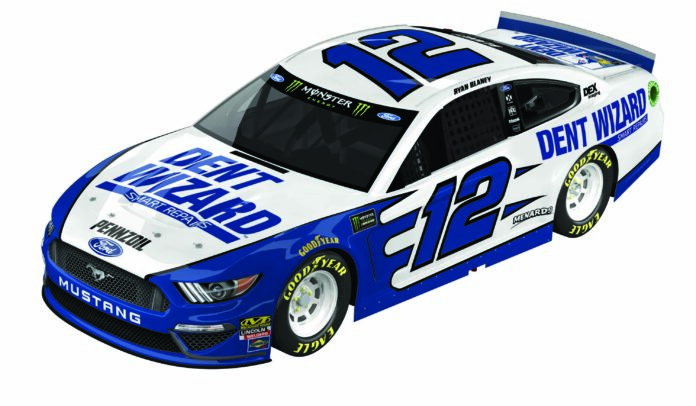 Automotive Reconditioning Brand to be Featured on the No. 12 Ford Mustang Driven by Ryan Blaney

MOORESVILLE, N.C. (May 21, 2019) – Today, Team Penske announced a new multi-year partnership with Dent Wizard, North America’s largest provider of automotive reconditioning services and vehicle protection products. The Dent Wizard brand will debut as the primary sponsor on the No. 12 Ford Mustang driven by Ryan Blaney for two races in the Monster Energy NASCAR Cup Series (MENCS), including the August 17 race at Bristol Motor Speedway and the October 13 event at Talladega Superspeedway.

“Dent Wizard has established itself as an industry leader and we welcome them as our newest partner at Team Penske,” said Roger Penske. “We have enjoyed new opportunities with some new partners since our NASCAR Cup Series program expanded to three full-time entries last season with Ryan (Blaney) joining Brad (Keselowski) and Joey (Logano). We are excited to work with Dent Wizard to help build the company’s brand and showcase its services.”

“We are excited about the Team Penske partnership,” said Mike Black, Dent Wizard President and CEO. “At Dent Wizard, our team of 3,000+ associates pride ourselves on exemplifying our core values of integrity, innovation, customer devotion and excellence. Having spent the last 35 years in the reconditioning industry, we have learned to value great partnerships that create a win-win for both parties. Dent Wizard is happy to continue building our business and brand within the automotive space.”

At just 25 years old, Blaney has emerged as one of NASCAR’s brightest young stars. In 2018, he captured his second career Cup Series victory at the ROVAL at Charlotte Motor Speedway, while he won three poles and finished10th in the NASCAR Cup Series standings. This season, Blaney won the pole at ISM Raceway in March and he is currently ranked 10th in the standings.

“It’s great to build a new relationship with Dent Wizard and have them as part of the No. 12 Mustang team,” said Blaney. “I hope to bring their brand a ton of new exposure at two great tracks later this year and into the future.”

About Team Penske
Team Penske is one of the most successful teams in the history of professional sports. Cars owned and prepared by Team Penske have produced more than 520 major race wins, over 590 pole positions and 34 Championships across open-wheel, stock car and sports car racing competition. Over the course of its 53-year history, the team has also earned 17 Indianapolis 500 victories, two Daytona 500 Championships, a Formula 1 win and overall victories in the 24 Hours of Daytona and the 12 Hours of Sebring. Team Penske currently competes in the IndyCar Series, the Monster Energy NASCAR Cup Series, the NASCAR XFINITY Series and the IMSA WeatherTech SportsCar Championship. The team also races in the Virgin Australia Supercars Championship, in a partnership with Dick Johnson Racing, as DJR Team Penske. For more information about Team Penske, please visit www.teampenske.com.