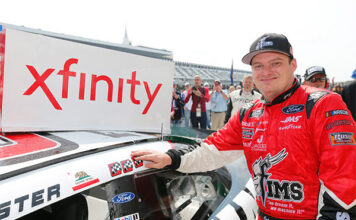 “Congratulations to Cole, Tony, Gene, and the No. 00 crew,” said Doug Yates, President and CEO of Roush Yates Engines. “Cole did an amazing job, chasing down Tyler Reddick and passing him on the final lap for the win. It’s such a privilege to be part of the Ford Performance team and help support these talented drivers with the power under the hood for the Ford Mustangs.”

After starting from the pole position on Saturday, Custer won the first stage of the race, on his way to leading a race high 58 laps out of the 103-lap race.

As a late race caution caused the race to go into overtime, Custer showed patience and maturity. Although, the No. 00 was passed on the restart, Custer made a veteran move, going low as Tyler Reddick took the final turn wide. Custer was able to pass Reddick on the inside, taking the lead and the checkered flag, .226 seconds ahead of Reddick, and clinching his first victory at the 2.5-mile track.

“We are hitting our stride,” commented Custer, when asked about the team in Victory Lane. “We have really fast cars and it is just a matter of doing it week in and week out and we have been doing it. We just need to keep going out there and execute.”

The NASCAR teams will head to Michigan to race the first of two races at Michigan International Speedway this season. Reference the full 2019 schedule on www.roushyates.com.

Ford Performance in partnership with Roush Yates Engines is the exclusive engine builder of the NASCAR FR9 Ford V8 engine and twin-turbo EcoBoost Ford V6 race engine that powers the Ford GT super car in the IMSA and FIA series.

With an unparalleled culture of winning and steeped in rich racing history, Roush Yates Engines continues to follow the company’s vision to lead performance engine innovation and staying true to the company’s mission, provide winning engines through demonstrated power and performance.