Joe Graf, Jr. Goes Back to Where It All Began Looking to Finish What He Started Last Year in Menards 250 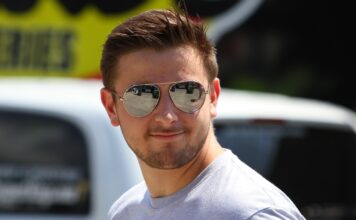 Last year’s Menards 250 presented by MatrixCare left several drivers feeling as though they left a potential victory on the table.

Gus Dean, driving for Win-Tron Racing and team owner Kevin Cywinski, used a unique pit strategy and some old-fashioned good luck to hold off an aggressive Joe Graf, Jr. (No. 77 EAT SLEEP RACE Ford) in a three-lap dash to the checkered. Graf began his racing career driving Bandolero cars at the three-eighths mile oval located in Elko New Market, just about 30 minutes outside of Minneapolis-St. Paul. He used that knowledge of the track to put himself in contention for what could have been his first career victory but came out on the short end of a fender-banging duel with Dean.

Graf took those lessons and went on to earn his first career ARCA Menards Series victory later in the season at Berlin Raceway, knocking fenders with eventual runner-up Zane Smith over the final couple of laps to score the win.

He’s now known as one of the more physical drivers in the series, but Graf makes no apologies for his driving style.

“It’s hard to get into Victory Lane, so you have to get up on the wheel and do what it takes. I want to win. I thrive on winning and when you’ve had the year that I have, I make no mistake about doing what I can to put our Chad Bryant Racing team in Victory Lane. I respect my competitors but at the same time, I have a job to do. Sometimes being aggressive can get you in trouble, but for me if being aggressive and sometimes even using the fenders propels our team forward, then it’s something I shouldn’t apologize for.”

Graf will put that aggression to use as he tries to score his second career ARCA Menards Series victory on Saturday night. He knows the rough-and-tumble style of racing that the series produces on short tracks will only be heightened on the series’ shortest racetrack.

“Being at the front and on the bottom,” he chuckled. “I learned a lot last year. Gus and I raced hard. Yeah, it got a little physical on the restart but I don’t think anyone expected different. You need to have tires, track position and luck to win at Elko. I’ve been waiting to get back to Elko since last year and I feel like it may be one of my best opportunities to get back in Victory Lane this season.”

Practice for the Menards 250 presented by MatrixCare at Elko Speedway is set for 2:15 pm ET/1:15 pm CT, General Tire Pole Qualifying is scheduled for 6:15 pm ET/5:15 pm CT, and the 250-lap feature event will go green shortly after 10 pm ET/9 pm CT. The race will be televised live on MAVTV, and ARCA for Me members can follow every lap made by every car entered throughout every on-track session with free live timing & scoring at ARCARacing.com. Discounted tickets to the Menards 250 are available at nearly 40 Minneapolis-St. Paul Menards locations for just $20. For more information, please visit TrackEnterprises.com or call 217-764-3200.