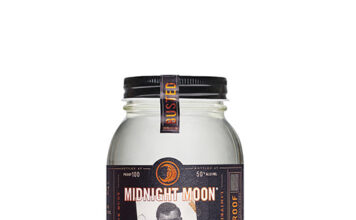 The sponsorship promotes Midnight Moon’s introduction of a limited-edition, augmented reality label which literally comes to life to tell the story of Junior’s moonshine bust and arrest through an app on your phone. As part of the promotion, a special paint scheme will prominently feature Junior’s mugshot photograph on the hood.

The augmented reality technology offers Midnight Moon adult consumers a fun, new way to interact with the brand.  Upon downloading the “Midnight Moon AR Experience” app to their phone from the App Store or Google Play, they can point their phone at the limited-edition label of Junior Johnson’s mugshot and listen to him recall the story of his infamous moonshining arrest.

“We couldn’t think of a better way to support the Midnight Moon Moonshine Busted label introduction than to marry Junior’s old-school roots in racing at Bristol with the new-school capabilities of the GMS race teams,” says Joe Michalek, President and Founder of Piedmont Distillers. “Our goal is to celebrate Junior’s moonshine and racing legacy with NASCAR fans and what better place than Bristol Motor Speedway!

“Junior personally approved the story and said, ‘I must have told that story a thousand times over the years, but I never imagined my mugshot photograph would tell the story on a phone right in the palm of your hand. It’s very cool.’”

The new limited-edition label and sponsorship of the GMS Racing teams are part of a campaign which will include a social media promotion where race fans get a chance to join the GMS teams at Bristol. Race fans can follow Midnight Moon on Facebook, Instagram or Twitter to get more information.

“I’m excited to have Midnight Moon back with us at Bristol,” Moffitt said. “The new promotion they have is a cool way to tell some of Junior Johnson’s story, and to have a connection to a NASCAR legend like him is awesome. Sipping some Midnight Moon Moonshine in Victory Lane would be the perfect way to celebrate.”

“Junior Johnson is a NASCAR legend, so it’s pretty cool to have his brand on our car at Bristol next month,” Nemechek said. “Growing up in a racing family I’ve heard a lot of stories about him and I’d really like to honor him by getting a win in the Midnight Moon Camaro.”

Midnight Moon is inspired by Junior family recipes and holds true to the roots of moonshine as it’s made from American corn and handcrafted in small batches. Midnight Moon offers an unflavored straight-style, as well as a number of authentic moonshine flavors hand-packed with real fruit.  Flavors include Apple Pie, Cherry, Strawberry, Blueberry, Blackberry and more. Midnight Moon is sold in all fifty states and ten international countries.