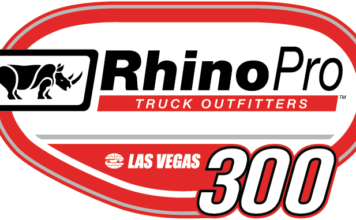 “We were just tight and we tried to make adjustments to fix it and it helped some spots but not others. It was a tough weekend because we didn’t have the best practice. It was hard to adjust for what we needed to do in the race. I was happy with it. I can’t than everyone at Haas Automation, Ford Performance and Roush Yates Engines enough. We had a great regular season and I am really looking forward to the playoffs.”

HOW EXCITED ARE YOU TO GET THE PLAYOFFS GOING? “I am pumped for it. This has not been our best track this year. We have run solid, but it hasn’t been the best for us. I think all the playoff tracks we will be strong and I think all the other teams should look out for us.”

ARE YOU THE PLAYOFF FRONTRUNNER? “Any given weekend, yeah. We can go there and when we are on it we can win. We have really fast Mustangs and I think there are a lot of tracks in the playoffs that are good for us. This place has been tough for us to figure out but I don’t think you will see many of these kind of tracks in the playoffs. I am looking forward to it.”

WHICH ROUND IS GOING TO BE HARDEST? “Probably the second. You will have to be really on your game. The first one, as long as you don’t have any big problems you should be fine but you never know with this format. We will see. I think we have some pretty strong tracks.”

IS IT YOU, REDDICK AND BELL THE TOP THREE RIGHT NOW? “For the most part, consistently, yeah. There are some guys, the 98 and the 22 and the 7 that can run up there on some weekends and be in the mix but I think consistently we are the best three and have been up front at every track this year.”

WHAT IS THE KEY TO BEAT THOSE GUYS? “It is so hard to say. Every track is different. I think we can go and win at any track so it is just a matter of getting the handling right and being good on the long runs.”

“That speeding penalty was just stupid. We had six or seven seconds behind the leader and another six or seven seconds to third place so there was nothing to gain and everything to lose. I knew I was slow initially so I sped up and when I sped up I did too much and started wheel hopping and sped on entry. I don’t know. I feel like this has been our best race car the last two months and this has been our worst finish the last two months. In the playoffs, if you have a mistake like that you will be out. I have to clean that up. I am proud of our Ford Performance Mustang. We were really good. Everyone keeps asking who is going to be the fourth guy. That last stage I think I proved we can run with any of ‘em. If we can keep bringing cars like that in the playoffs we can contend for wins and if we can get to Homestead we will have a good shot.”

DID THE WAY YOU WERE TRACKING GUYS DOWN THERE AT THE END GIVE YOU SOME CONFIDENCE GOING FORWARD? “Yeah, I was honestly surprised that Allgaier didn’t move to the top earlier when he saw me coming with so much speed. I showed it to him for two laps and ran him down quite a bit. I know that racing with Bell as much as I have on the dirt stuff he is so good at moving around and with the mirrors in these things it is easier to know what is going on. I knew when I moved up there that there was no chance I could get to him without him knowing I was there. He was just a little better overall. We could run with him, just not as consistently as we needed to. When the sun went down I started tightening up too much and that didn’t help. I wish I hadn’t sped on pit road. We weren’t going to win the race because of the 2 stretching fuel, but we could have easily ran top-three.”

HOW DO YOU FEEL ABOUT YOUR TEAM’S CHANCES IN THE PLAYOFFS? “I feel great about our team. I feel like we have been hitting on all cylinders. Obviously we have the speed we need to have and we still could use a little more but I think you can always use more. I have to clean it up on my end. You can’t make mistakes like that. If we put it all together I know we can run with any of them. I know if I get to Homestead I can run the fence good enough that we would be really tough to beat.”

“I am really proud of my guys for all the work they have done to get better on these types of tracks. That is the big takeaway for us today. Minimizing mistakes is crucial come playoff time and hopefully we got all those out of the way. I am really proud of this MoneyLion Ford Mustang and the speed we had. It just wasn’t our day I guess. We had speed. I think that is the biggest thing. Everything else was a bit of a struggle. I am glad we got it all out of the way before the playoffs. If we can bring race cars like that with good speed, I think there were only two or three cars better than we were and that says a lot. Word on the street is that I don’t know how to drive on ovals so I am excited about tonight’s performance. I will take that in stride and hopefully be able to bring that same stuff to Kansas and Texas and Homestead.”

HOW DOES THIS PLAY OUT FOR YOU WITH THESE 1.5 MILE TRACKS COMING UP IN AN ELIMINATION STYLE FORMAT? “I think it plays out great. I have said it time and time again that the second round is the hardest in this series. THere are six or seven guys that deserve to be in the final four and we are one of them. Three of the last for races are 1.5 mile tracks so it is a good time to be good at those.”

DO YOU FEEL CONFIDENT NOW HEADING INTO THE PLAYOFFS? “As far as execution goes, that was a struggle point tonight. As far as speed goes, that is one of the best races we have had next to Kentucky as far as 1.5 mile tracks go. I screwed up Kentucky and we let ourselves down tonight. That is a wash now. We will take that momentum and knowing we can bring fast race cars to the racetrack and bring it to the playoffs.”