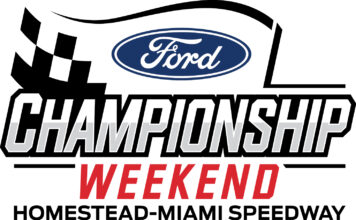 PLANO, Texas (November 14, 2019) – NASCAR and NHRA head to the final races of their seasons with five Toyota drivers in the running for championships, while USAC returns on-track after a nearly month-long absence to begin the closing part of its year.

Record-Breaking Season for Toyota, Gibbs… With Denny Hamlin’s victory in Phoenix, Toyota extended a record-breaking season in the Monster Energy NASCAR Cup Series (MENCS). It was the 18th Cup win this year for both Toyota and Joe Gibbs Racing (JGR), which is the most victories recorded by Toyota and JGR in a single season. Hamlin’s victory helped secure the manufacturer’s title for Toyota in 2019 for the third time in the past four seasons.

Three Toyotas in the Championship 4… The season-long success of JGR is also showcased in the Championship 4 as JGR and Toyota become the first team and manufacturer to place three Cup drivers in the four available spots to run for the title. With his win, Hamlin joins Martin Truex Jr., who earned his spot with a win in the Round of 8 opener at Martinsville Speedway, and Kyle Busch, who claimed the only spot available via points, to run for the championship in Miami. Truex (2017) and Busch (2015) are looking for their second championships, while Hamlin looks to earn his first. All three are former victors at Homestead-Miami Speedway with Hamlin winning at the track twice (2009 and 2013), while Busch (2015) and Truex (2017) have one win a piece. Hamlin has also earned the pole position in three of the last four Miami races.

Bell Looks for Redemption… Christopher Bell is headed back to the Championship 4 in the NASCAR Xfinity Series (NXS) for the second straight season. Bell leads the series with eight wins and looks to claim his first NXS title. If Bell could win the championship, it would be his second NASCAR national series title to go along with his 2017 NASCAR Gander Outdoors Truck Series (NGOTS) championship.

Truck Manufacturer’s Title in Sight for Toyota… With one race remaining in the NGOTS season, Toyota looks to claim its series-leading 11th manufacturer’s championship. Toyota has a nine-point advantage heading into Homestead-Miami Speedway and is guaranteed to clinch the title if a Toyota driver finishes fifth or better. It would be the sixth title in the past seven seasons for Toyota.

Eckes Plans to Deliver… ARCA Menards Series champion Christian Eckes looks to deliver an owner’s championship to Kyle Busch Motorsports (KBM) in the NGOTS race this weekend driving the No. 51 Tundra. Coming into this weekend, KBM has a series-leading six owners titles. The No. 51 team has six triumphs this season with Busch scoring five wins and Greg Biffle claiming victory in his return to the Truck Series at Texas Motor Speedway in June. Eckes has made seven starts in the No. 51 Tundra this season, earning three pole awards and a best finish of third in Las Vegas in September.

Ankrum is Rookie of Year… Despite missing the first three races of the season due to NASCAR’s age restriction, Tyler Ankrum will officially clinch the NGOTS Rookie of the Year when the checkered flag waves at Homestead-Miami Speedway on Friday. The 18-year-old Ankrum was the only rookie contender to earn a spot in the NASCAR Playoffs due to his win at Kentucky Speedway in July. Ankrum advanced to the Round of 6 before being eliminated at ISM Raceway. He is the fourth Toyota driver to earn Rookie of the Year honors at the NGOTS level along with Erik Jones (2015) and former Toyota drivers William Bryon (2016) and David Reutimann (2004).

Kalitta in Title Hunt at Finale… Doug Kalitta heads to this weekend’s NHRA Finals squarely in the hunt for his first Top Fuel world championship. He enters this weekend’s action in third place, 55 points – just under two rounds – out of the lead. Kalitta has shined at the Auto Club Raceway at Pomona in recent years, winning three of the last six events at the track including this year’s Winternationals in February.

Langdon Looks to Join Elite Club… After winning earlier in the Countdown to the Championship at St. Louis, another victory this weekend would put Shawn Langdon in elite company as one of just six drivers to win at Pomona in both Top Fuel and Funny Car. He would join Don Prudhomme, Kenny Bernstein, Gary Scelzi, his current co-crew chief, Del Worsham, and teammate J.R. Todd. Langdon, who grew up less than 20 miles from Pomona, won four times in Top Fuel before making the switch to Funny Cars in 2018.

Toyota Top Fuelers Dominate at Pomona… Toyota Top Fuel drivers have won 14 of the last 21 races at Auto Club Raceway, including eight of the last 10 NHRA Finals. In addition, Camry Funny Car drivers also have recorded four wins in the finale since 2008.