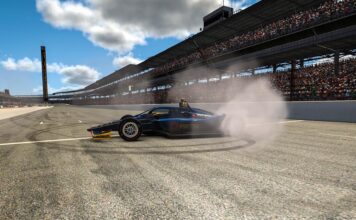 Despite being on the front row for the final round of the IndyCar Challenge, Team Penske driver Scott McLaughlin wasn’t really in contention until late in the race. In fact, McLaughlin had to dodge a couple of wrecks that involved the leaders on the last lap to score the win in the First Responder 175.

“I was hoping there was going to be one wreck, and there was two,” McLaughlin said to NBC Sports about the victory. “I thought we were going to get third, but we were in the right place at the right time.”

The First Responder 175 was action packed from the start. Formula 1 star, Lando Norris was back in the field and was on the front row. He would lead lap 1. The yellow flag didn’t take long to fly either. The first yellow of the race occurred on lap 5, where drivers Alex Palou and Tony Kanaan got together. In doing so, this allowed some drivers to play pit strategy and pit early.

After the restart on lap 11, Scott Speed, Will Power, and Graham Rahal were the top three with Norris in fourth. Power was able to take the lead a few laps later after an almost near collision with Speed and Rahal. Rahal had slight contact with the leaders, giving him some wing damage. During those incidents, Colton Herta also spun out by wrecking in the fence, but there would be no yellow.

Due to the early accident, Kanaan retired from the race on lap 16 and was credited with a last place finish.

With around 30 to go, the green-flag pit stop cycle ended and Power was back in the lead with Davison in second, and Norris rounding out the top-three. Four-laps later, Power would pit from the lead, and eventually Davison pitting. During the cycle, Norris took the lead for a short while.

Up until that point, there was a long green-flag run. However, that was ended by a caution with 18 to go, as Stefan Wilson and Davison wrecked on the backstretch after contact from Scott Speed. Under the caution, several drivers such as Scott Dixon, Conor Daly, Josef Newgarden, Karam, Ryan Hunter-Reay, Alexander Rossi made a late race pit stop for fresher tires.

There was a one-lap restart, before another yellow was flown with 13 to go, as Newgarden, Karam, among other drivers were involved in another incident. This saw 2019 Indy 500 winner Pagenaud as the leader for the next restart. Though as the normal saying, ‘cautions breed cautions’ was in play and Pagenaud was the next victim, as he would have an accident with eight to go.

From there, a late-race restart saw some wild action toward the end of the race. Norris, who was up front early, was taken out of the race with four to go as he had accidentally spun himself in the back of Pagenaud while coming down to pit road.

On the last lap, there were several incidents that involved multiple leaders. First, there was a wreck going into Turn 3 and 4, and finally, there was a wreck with the leaders coming to the checkered flag. However, V8 Sports Car ace and IndyCar newcomer, Scott McLaughlin was able to avoid those incidents and take home a virtual win at the virtual Indianapolis Motor Speedway.

This was the final round for the IndyCar Challenge. Despite their not being a champion awarded, IndyCar will get to make a $30,000 donation of their partner charities.

There were three cautions for nine laps during the virtual First Responder 175.

Up Next: With the virtual racing now complete for the IndyCar Series, series officials will hope to get back to real-life racing at Texas Motor Speedway that is currently scheduled for Saturday June 6. However, the schedule remains fluid due to the on-going COVID-19 situation.