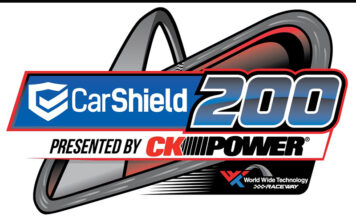 – Sheldon Creed lined up 17th for Sunday’s event. Creed reported the truck was good during the long green flag run that opened the race, but was tough in dirty air back in the field. Creed had climbed to eighth by the conclusion of Stage One. Creed’s truck was tight through most of the second stage, but he managed to break into the top five by the end of Stage Two. Creed took the lead on Lap 132, but would lose it one lap later before regaining the lead for good on Lap 147.

– This is Creed’s second win in the last three races and his third win in 2020. GMS has six Gander Trucks wins so far in 2020.
– With two victories in the Triple Truck Challenge, Creed earned a bonus of $150,000 in the last three races.
– Creed led twice for a total of 15 laps.
– Creed is currently fifth in the points standings. Creed is locked into the playoffs with three victories.

“I want to start with apologizing to the 38 (Todd Gilliland). It’s so hard to pass here and I got the opportunity to get to his inside and just was really loose getting in and he was close to my door. They were having such a good day and me and Todd are buddies. Hate to do that to him. They’re a strong team. He owes me one.

Hats off to my guys. Great adjustments all day long. Came from 17th and had my work cut out for me. I just tried to do clean passes and I had to be really aggressive. Chevrolet Accessories, Team Chevy, GMS Racing, GMS Fab shop, Jeff (Stankiewicz, crew chief) and all my guys, my family back home thank you guys! Happy to get another win before playoffs start.”

– Zane Smith started on pole and led the first 45 laps of Sunday’s race. Smith earned stage points with a second-place finish in Stage One. Smith was consistent throughout the race, finishing third in the second stage. Smith was held up on a late-race restart and ultimately finished seventh.
– This is Smith’s second top-10 Gander Trucks finish at WWT Raceway at Gateway.
– Smith led once for a total of 45 laps.
– Smith has recorded four top-five and nine top-10 finishes so far in 2020.
– Smith is currently second in points, 28 points behind the leader. Smith is locked into the playoffs with his wins at Dover and Michigan.

“We had a solid day and scored some good stage points. We just struggled in the final stage and got stuck on the final restart. It’s so hard to pass here, but still able to bring home another top-10 finish.”

– Brett Moffitt second for the fourth time this season. Moffitt was consistent during the long green-flag run that opened the race, finishing third in the first stage. The team pulled a spring rubber and rounds out of the left rear to help correct a tight condition as the run went on. Moffitt fought some tough competition during Stage Two to finish sixth and collect more valuable stage points. Moffitt progressed during the final stage, capitalizing on a late-race restart to finish second, his third second-place finish in the last six races.

– Moffitt has earned three consecutive top-three finishes.
– This is Moffitt’s sixth top-five and ninth top-10 finish this season.
– Moffitt is currently third in the championship points standings, 33 points behind the leader. He is currently 118 points above the playoff cutoff line.

“Today was frustrating. We weren’t all that good, we were just in the right place at the right time. All the GMS trucks had a lot of speed so obviously thankful for that and proud of everyone back at the shop and the trucks they’re bringing us. We just need to keep getting better, which we have been, so it’s a positive. It’s just frustrating not to be winning races. Congrats to Sheldon. It’s good being able to work with teammates on the final restart and push him to the lead and he was able to hold us off.”

– Sam Mayer started 15th for Sunday’s race and had climbed to sixth by the end of the first stage. The team took on four tires and fuel during the break and made an air pressure adjustment to help the handling of Mayer’s Silverado. Mayer slowly climbed through the field, finishing the second stage in fourth and taking over the lead on Lap 122. Mayer lost the lead on a late race restart and would ultimately finish fourth.

– This is Mayer’s best career Gander Trucks finish and his first top-five finish in five starts.
– Mayer led twice for a total of 24 laps.

“I was just trying to play games on that last restart and it didn’t work out in my favor, obviously. That’s what I get for playing games, I was a sitting duck really. I’m proud of my GMS guys. They did a heck of a job giving me a great truck to run up front. I’m not the fastest guy on this track, but I sure am better in the truck than in the ARCA car for sure.”

– Tyler Ankrum started eighth for Sunday’s event and raced hard inside the top 10 for most of the first stage. Ankrum settled in for the long green flag run that opened the race and finished Stage One in 10th, earning valuable stage points. The team made adjustments during the first break that would improve Ankrum’s LiUNA Silverado and Ankrum finished Stage Two in the seventh position. Ankrum was trapped on a late race restart and fell to finish 12th.
– Ankrum is currently ninth in championship points standings, 15 points above the playoff cutoff line.

“We had a decent GMS 26 LiUNA Chevy Today. We fought hard inside the top 10 all day and earned some good stage points. I was unlucky with people spinning their tires in front of me on the final restart. We just have to keep fighting and we move on to Darlington.”