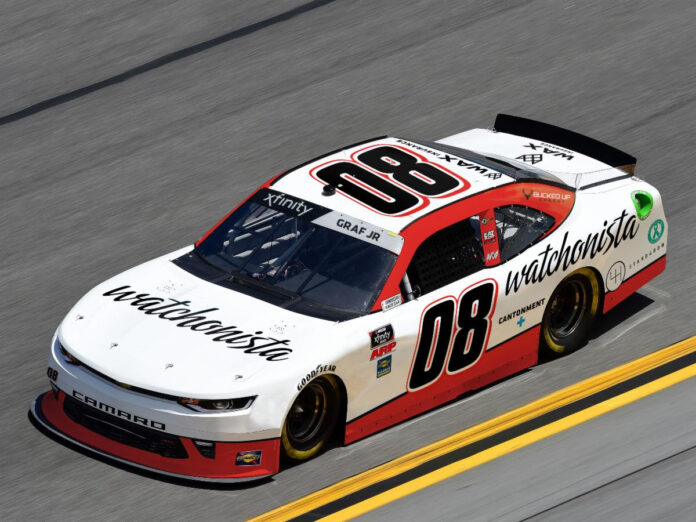 Every day, visitors flock to Watchonista’s website and social media channels to interact with immersive content produced by their dynamic team of writers, editors and content producers.

Founded in 2009 by Alexander Friedman and Marco Gabella, both watch and car lovers, Watchonista has also been active in both the car and Motorsports arena interviewing drivers such as Lewis Hamilton, Mario Andretti, Graham Rahal, Tom Kristensen, and seven-time NASCAR Cup Series champion Jimmie Johnson.

Additionally, Watchonista will bring the added support of its partners WAX Insurance, STANDARD H, and Cantonment, all of which will have placement on Graf Jr.’s No. 08 Watchonista Chevrolet Camaro in the final road course race of 2020.

“We’re thrilled to partner with SS-Green Light Racing and Joe Graf Jr. for the Charlotte ROVAL race,” said Josh Shanks, Watchonista Editor-in-Chief. “As a former Hoosier turned New Yorker, motorsports runs in mine and Watchonista’s veins. This partnership will only help fuel Watchonista’s continued expansion in the United States market.

“We’ll be standing by to insure and protect the winner’s trophy!”

For Graf Jr., 22, Watchonista is the third new partner that he has brought to the NASCAR Xfinity Series scene since returning from the COVID-19 pandemic in May.

Collectively, Graf Jr. and Watchonista are committed to growing their relationship both on and off the track heading into the 2021 season.

“I’m super excited to welcome Watchonista to NASCAR and have them be a part of the NASCAR Xfinity Series with SS GreenLight Racing,” offered Graf Jr. “I’m a frequent visitor to the site being an avid collector of many things myself and to be able to bring this partnership to fruition is a testament to a lot of hard work and Watchonista eager to expand their horizons.

“Hopefully, we can have a strong finish on Saturday for Watchonista, WAX Insurance, STANDARD H, and Cantonment and then work on building our partnership for years to come.”

Graf Jr.’s race car will also have a special “Cancer Hero” tribute ribbon for Shanks’ mother, Teresa Shanks, who is fighting Stage III ovarian cancer. Following the completion of the race, Watchonista will be making a donation for ovarian cancer research on her behalf.

Watchonista was founded by Alexander Friedman and Marco Gabella in 2009 as a progressive digital platform by and for watch collectors and connoisseurs, at a time before the traditional watch industry fully embraced digital communications. Today, Watchonista has become an international, multi-media hub and a comprehensive database of some of the world’s most fascinating watch brands and products, delivering daily watch-centric content that balances the unbridled passion of watch collectors with a fact-filled journalistic approach.

With offices in Geneva and New York City, Watchonista’s global network and its contributing historians, connoisseurs, and journalists allow the media platform to be responsive and relevant, with a unique voice that appeals to its engaged readers around the world. Follow Watchonista on Instagram @watchonista or online at watchonista.com.