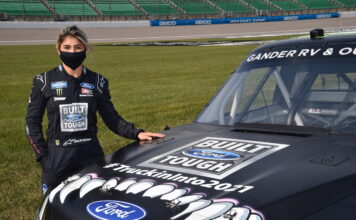 DEARBORN, Mich., Oct. 17, 2020 – Hailie Deegan, driver of the No. 4 Ford for DGR-Crosley in the ARCA Menard’s Series, will transition to the NASCAR Camping World Truck Series in 2021, thus taking the next step in her Ford Performance Development Driver career.

“We are very happy with Hailie’s progress as demonstrated in her first year as a part of our Ford Performance driver development program” said Mark Rushbrook, global director, Ford Performance Motorsports. “Continuing with the consistency from DGR-Crosley, Hailie is ready to make the step to the NASCAR Truck Series providing some intense competition and great racing.”

“I’ve enjoyed watching Hailie progress in the ARCA Menards Series this season and prepare for the next step in her racing career, moving up to the NASCAR Camping World Truck Series in 2021,” said David Gilliland, co-owner, DGR-Crosley. “I’m happy DGR-Crosley can be part of her learning process as she transitions to the next level of competition and we’re all excited to start prepping for next season with her.”

Deegan joined the Ford Performance family in December 2019 with a broad scope of racing activities planned. Unfortunately, some of that plan changed due to the nature of 2020, but she has already delivered upon numerous challenges despite the altered seat time.

Deegan, the 2020 ARCA Menards Series Bounty Rookie of the Year, finished third in the ARCA championship standings. Deegan made her Ford debut with a runner-up finish at Daytona in February on her way to 17 top-10 and four top-five finishes in 20 races.

“I am excited for this next step in my career with Ford Performance,” said Deegan. “I have raced trucks in the off-road world but to now have the opportunity to race trucks next season in the NASCAR Camping World Truck Series is a dream come true. I have some great partners already behind me for next season. We have a few primaries still available and I hope that we can fill these up in the coming weeks. I can’t wait for Daytona 2021 to get here.”

Deegan also competed in the opening event of the IMSA sports car racing season, sharing the seat of a Mustang GT4 with fellow Ford Performance development driver Chase Briscoe for a flurry of first experiences over the four-hour race. Hailie also got to experience the power of Ford’s all-electric Mach-E 1400 prototype demonstrator firsthand when she helped publicly unveil the vehicle in July alongside Joey Logano, Ken Block, Vaughn Gittin Jr. and Chelsea DeNofa.