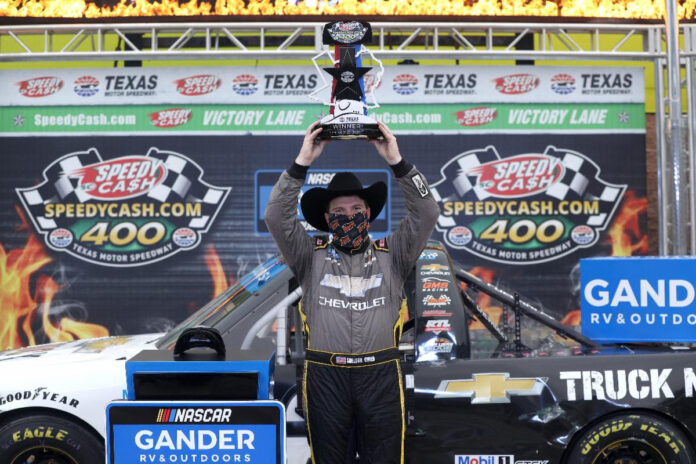 FORT WORTH, Texas (OCT. 25, 2020) – Sheldon Creed dominated throughout the SpeedyCash.com 400 at Texas Motor Speedway but it took a push from teammate Brett Moffitt after an overtime restart to get clear of the field and qualify for the Championship 4 in the NASCAR Gander RV & Outdoors Truck Series.

Creed led eight times for 128 laps to earn his fourth victory of the season. His other victories this season came in July at Kentucky Speedway, and in August at both Daytona International Speedway and World Wide Technology Raceway at Gateway. It was his first Gander Trucks victory in six attempts at No Limits, Texas.

Creed started from the pole in his No. 2 Chevrolet followed by championship challengers Moffitt, Hill, Grant Enfinger, Chandler Smith, Zane Smith, Crafton and Ben Rhodes. Creed led the field throughout the first 35 laps to take the Stage 1 win. The caution flag waved just one lap prior to the end of the stage due to an incident in Turn 4 with Tim Viens and his No. 49 CMI Motorsports Chevrolet.

Stage 2 began on Lap 41 with Creed still at the point. He was still out front when the day’s second caution flew on Lap 43 due to hard contact in Turn 2 by the No. 68 Toyota of Clay Greenfield. The race was red-flagged for five minutes to clean the debris.

Ben Rhodes put his No. 99 Ford out front for the Lap 48 restart but Creed jumped back on top one lap later. Creed maintained the lead until Lap 58 when Matt Crafton pushed his No. 88 Ford to the lead.

Again, however, it was just one lap before Creed moved back ahead where he stayed through Lap 64. Crafton wasn’t finished and took back the lead on Lap 65 and was leading three laps later when to take the Stage 2 win after Lap 70.

The final stage proved costly for multiple championship contenders. On Lap 93, the No. 98 Ford of Grant Enfinger pulled into the garage, done for the day with a mechanical issue. On Lap 107, Rhodes and the No. 38 Ford made contact but both continued. And On Lap 118, the No. 51 Toyota of Chandler Smith had a wheel come loose, and off, on the backstretch. Later, on Lap 14x of the scheduled 147, Rhodes’ truck suffered damage to the left-front after hard contact with the No. 18 of Christian Eckes, forcing an overtime finish.

The green-white-checkered finish began on 151 with Austin Hill and the No. 16 Toyota challenging Creed for the top stop. GMS Racing teammate Brad Moffett provided the push Creed needed to get out front going into Turn 3 coming to the white flag. He maintained the top spot to cross the finish line ahead of Hill. The race actually ended under caution as the yellow flag was shown just before Creed crossed the start/finish.

There were 14 lead changes among six drivers and 10 cautions for 49 laps.

TICKETS:
Adult season tickets for the 2021 season start at just $169 with season tickets for kids ages 12 and under starting at just $30. Tickets are also on sale for this Sunday’s Autotrader EchoPark 500/SpeedyCash.com 400 NASCAR playoff doubleheader and can be obtained at www.texasmotorspeedway.com/nascar-indycar-tickets/individual-tickets or by calling (817) 215-8500.