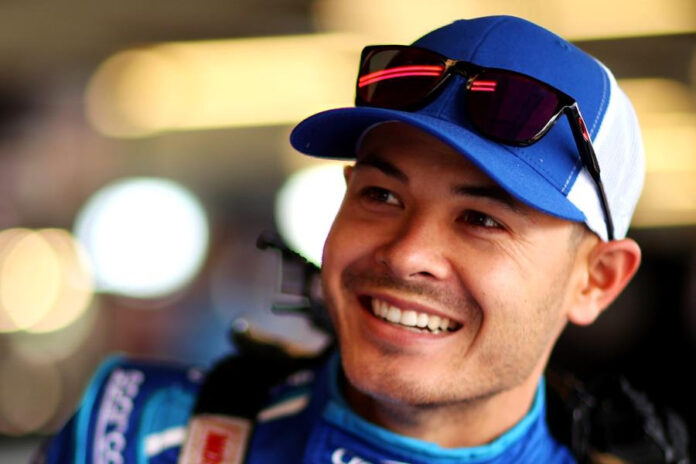 TEAM TO REINTRODUCE FLAGSHIP NO. 5 CHEVROLET IN 2021

CONCORD, N.C. (Oct. 28, 2020) – Hendrick Motorsports this morning signed driver Kyle Larson to a multi-year contract that will see him join the 12-time NASCAR Cup Series champions beginning with the 2021 racing season. He will pilot the No. 5 Chevrolet Camaro ZL1 1LE, which the organization will field for the first time since 2017.

Larson has won more than 250 events across a variety of sanctioning bodies and vehicle styles. The Elk Grove, California, native began driving at age 7 and has raced stock cars, winged and non-winged sprint cars, karts, trucks, and sports cars. In 2021, he will be paired with crew chief Cliff Daniels, 32, who currently leads the No. 48 Hendrick Motorsports team with seven-time NASCAR Cup Series champion Jimmie Johnson.

“Kyle is unquestionably one of the most talented race car drivers in the world,” said Rick Hendrick, owner of Hendrick Motorsports. “He has championship-level ability and will be a significant addition to our on-track program. More importantly, I have full confidence that he understands our expectations and will be a tremendous ambassador for our team, our partners and NASCAR. Kyle and I have had many, many conversations leading up to today’s announcement. I’m confident about what’s in his heart and his desire to be a champion in all aspects of his life and career. Kyle has done important work over the past six months, and Hendrick Motorsports is going to support those continued efforts.”

Larson, 28, is half Japanese and the only Asian-American to regularly compete in NASCAR. He is the first NASCAR Drive for Diversity graduate to race full-time at the Cup level and now serves as a mentor for the program. Since 2018, he has been a volunteer with the Urban Youth Racing School in Philadelphia, which helps expose students of color to motor sports. In May, Larson also began working with the Minneapolis-based Sanneh Foundation to advance diversity, equity and community well-being. He and wife Katelyn live in North Carolina with their son Owen and daughter Audrey.

“Hendrick Motorsports is a championship organization that has set a high bar for performance and for how its drivers represent the team and its partners,” Larson said. “My goal is to win races, be a great teammate, continue my personal efforts to grow, and hold myself to that high standard personally and professionally. Making the absolute most of this platform and the opportunity in front of me is my focus. I know what’s expected of me and what I expect of myself, on and off the track.

“Mr. Hendrick is one of the people who extended a hand to me over the past six months. Our initial conversations were not about racing. He cares about me as a person and wants to see me succeed beyond driving. I can’t put into words how grateful I am for the commitment, the faith and the confidence from him and everyone at Hendrick Motorsports.”

Larson made his NASCAR Cup Series debut in 2013 and was named its 2014 rookie of the year in his first full-time season. In 223 starts at NASCAR’s top level, he has scored 101 top-10 finishes and secured four playoff berths (2016-2019). His tally of 20 points-paying NASCAR national series victories includes six at the Cup level, all with Chip Ganassi Racing. In addition, he won the NASCAR All-Star Race in 2019 and most recently has dominated on dirt, winning 38 times since May while primarily racing sprint cars.

With the addition of Larson, the average age of Hendrick Motorsports’ 2021 driver lineup, which includes Chase Elliott, William Byron and Alex Bowman, will be 26 years old at the opening of next season. Combined, the four drivers have already won 18 Cup Series points races and earned 14 playoff berths.

“I’m excited about our roster of young talent,” Hendrick said. “We have a team that is built to win races and compete for championships for years to come.”

Next season will mark the return of Hendrick Motorsports’ No. 5 Chevrolet, which is currently unsponsored for 2021. The organization will no longer field the No. 88 car number it has raced in the NASCAR Cup Series since 2008.

The No. 5 was the original car number campaigned by Hendrick Motorsports when Rick Hendrick founded the team in 1984. That year, Geoff Bodine drove it to three victories, including Hendrick’s first as a Cup Series car owner on April 29, 1984, at Martinsville Speedway.

“The ‘5’ is special to me. It’s the original,” Hendrick said. “I view it as Hendrick Motorsports’ flagship team in a lot of ways. To bring the car back to the racetrack is meaningful for my family and for many of our team members and fans. We plan to build on its winning history with Kyle and Cliff.”

With 1,129 NASCAR Cup Series starts, the No. 5 has appeared in more races for Hendrick Motorsports than any other car. Larson will be the 10th driver to field the number for the organization and will look to be the seventh to record a Cup win behind the wheel. It was most recently driven by Kasey Kahne in 2017.

In the No. 5 Chevy for Hendrick Motorsports, Terry Labonte recorded 12 victories and won the 1996 Cup Series championship. Bodine won seven races, followed by Kahne (six), Mark Martin (five), Kyle Busch (four), and Ricky Rudd (four). The No. 5’s total of 38 wins for Hendrick Motorsports trails only its Nos. 24 and 48 teams, which have 94 and 83 victories, respectively.