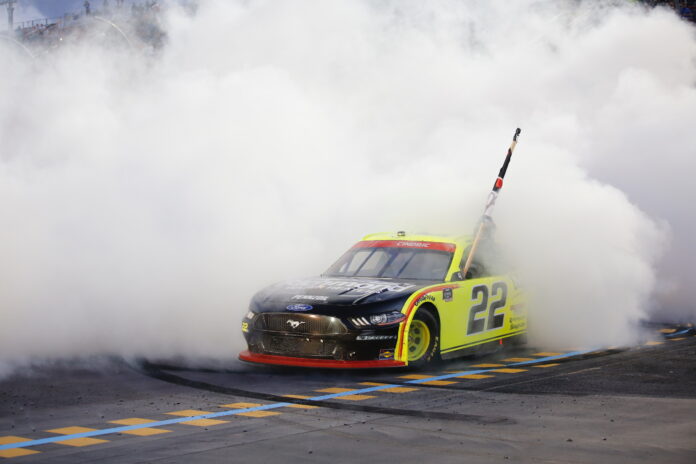 Cindric, who is in his second season driving for Team Penske, opted to give up the lead and pit when caution came out with three laps to go. The four tires he got from his crew proved to be the difference in the final two-lap dash to the finish. Cindric started third on the restart but was able to squeeze between leader Justin Allgaier and Noah Gragson shortly after taking the white flag. That move enabled him to eventually pass Allgaier in turn one and then Gragson in turn three to win the race and championship.

“What an amazing effort by this 22 team. Brian Wilson and all the guys. Everybody back at the shop. There was a lot of work put into this race car,” said Cindric, who will be back to defend his championship next season before moving up to the NASCAR Cup Series in 2022. “It’s awesome to get them a championship in NASCAR, to be a champion in NASCAR. Ford Performance, Doug Yates, everybody at Roush Yates Engines. I’m speechless. I can’t believe it. I’m pretty humbled by the effort for sure.”

Cindric won six races this season in what proved to be a career year. He and fellow Ford driver Chase Briscoe combined to win 15 of the 33 races, which was the most for any manufacturer.

“It’s incredible to see how Austin has developed from racing in IMSA with us, through trucks and then Xfinity, and to have such a strong breakout season with six wins now and winning the championship shows how much he’s developed,” said Mark Rushbrook, global director, Ford Performance Motorsports. “In this race he was just patient, looked for his opportunity and drove with a lot of confidence and got it done.”

Cindric’s championship continues an impressive streak that has seen Mustang win a driver’s and/or owner’s championship in all but two seasons since becoming Ford’s full-time NASCAR XFINITY Series model in 2011. Besides winning 10 combined championships in that time, Mustang has also won 100 series races.

“Mustang is a flagship for Ford Motor Company and it tells a great story about the company because it shows what we’re capable of, so to have it representing the company on the track in so many different series, especially in Xfinity with the success that it’s had, is important,” said Rushbrook. “Plus, the new body this year has demonstrated what our engineering tools are capable of in terms of developing and putting successful cars on the track.”