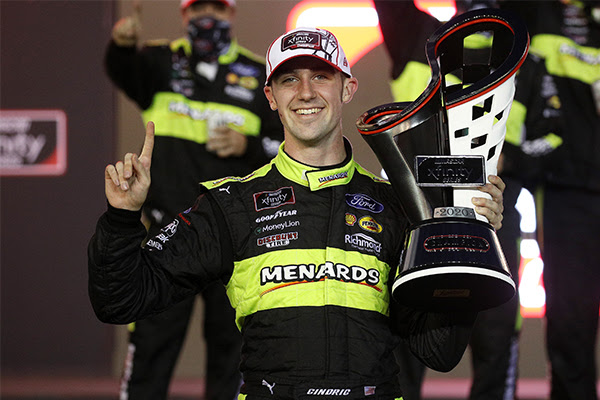 “Congratulations to Austin, Brian, Roger, and the entire Team Penske organization for winning the drivers’ and owners’ Xfinity championships,” said Doug Yates, President and CEO of Roush Yates Engines. “This win marks Austin’s sixth win of the year in addition to his Xfinity Regular Season Championship clinched earlier this year while Chase Briscoe also won nine races during the 2020 season for a total of 15 Xfinity wins. Thanks, and congratulations to everyone at Ford Performance for their dedication, passion and leadership for our NASCAR racing programs and winning the NASCAR Cup Manufacturers’ Championship that included 18 wins for the season.”

During the final laps of the Desert Diamond Casino West Valley 200 with Cindric leading, his crew chief and spotter reminded him to hit his marks and let him know he was clear in back, but then a late race caution came out. Crew chief Brian Wilson then made the call for Cindric to give up the lead and come in for four fresh tires.

Cindric would find himself lined up on the outside of the second row behind the leader, Justin Allgaier, going into overtime. The four fresh tires and the determination of the No. 22 driver proved to be the game changer. Cindric was able to drive his No. 22 Ford Mustang hard into the first corner and muscled his way through the middle of Allgaier and Noah Gragson. Cindric was able to pass both Allgaier and Gragson for the race win and clinch the championship. This marked Ford’s 100th Mustang Xfinity win and the 50th NXS win for Ford, Team Penske and Roush Yates Engines.

“Amazing effort by this 22 team,” remarked Cindric. “Brian Wilson and all the guys. Everyone back at the shop. There was a lot of work put into this race car. Roger Penske. Everyone from Penske Racing. It’s awesome to get them a championship in NASCAR, to be a champion in NASCAR, and do it in front of all these great people cheering us on at championship weekend. Ford Performance, Doug Yates, everybody at Roush Yates Engines. I’m speechless. I can’t believe it. I’m pretty humbled by the effort for sure.”

Cindric led 72-laps out of the extended 206 lap race while Stewart-Haas Racing’s, Chase Briscoe also drove a great race, winning Stage 1 and leading 41 laps to finish the race P9 and fourth in the championship. These two Ford teammates drove for a combined 15 wins out of the 33 races in 2020, which was the most for any manufacturer.

Team-Penske teammates Joey Logano and Brad Keselowski battled throughout the NASCAR Cup Series Championship race Sunday, leading a combined 141 laps out of the 312-lap race and winning Stage 1 and Stage 2 respectively. Keselowski would finish the race in P2 and Logano in P3.

With an unparalleled culture of winning and steeped in rich racing history, Roush Yates Engines continues to follow the company’s vision to lead performance engine innovation and staying true to the company’s mission, provide race winning engines through demonstrated power and performance.