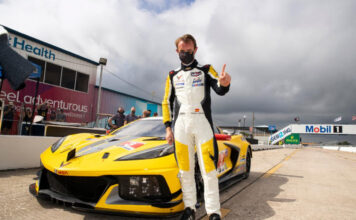 Corvette C8.Rs on first, second row in GTLM ahead of 2020 IMSA finale

SEBRING, Fla. (Nov. 13, 2020) – Corvette Racing’s Antonio Garcia claimed his second pole position of the season Friday ahead of the Mobil 1 Twelve Hours of Sebring, adding yet another exclamation point to a championship season for the No. 3 Mobil 1/SiriusXM Chevrolet Corvette C8.R.

Tommy Milner qualified the No. 4 Mobil 1/SiriusXM Corvette fourth in class at 1:56.446 (115.624 mph) and just 0.3 seconds from the front row. He and Oliver Gavin will look to secure second place in GTLM Drivers points Saturday alongside Marcel Fässler.

Garcia’s effort was the seventh pole position for Corvette Racing this season and sixth for the No. 3 C8.R. Garcia also claimed pole position for the 10-hour Petit Le Mans at Michelin Raceway Road Atlanta, and Taylor captured poles at Sebring in July, Mid-Ohio, Charlotte and WeatherTech Raceway Laguna Seca. Gavin, who will make his final full-season appearance for Corvette Racing, was the GTLM pole-winner at Daytona in July.

There are three goals ahead for Corvette Racing heading into Saturday. The first is claiming the GTLM Manufacturers Championship for Chevrolet, which will happen as long as one of the two Corvettes starts the race.

Next up is clinching second place in the GTLM Drivers and Team championships for the No. 4 Corvette. Then there is the matter of winning the race, which would mark Corvette Racing’s 12th win in the 12 Hours since 2002.

The event has witnessed the team take 11 class victories since 2002, and five of the six drivers have previously won there. Gavin leads with six GT-class victories, Garcia has three and Milner two. Taylor was part of one overall winning effort in the 12 Hours while Fässler has a GTLM win to his credit in a factory Corvette.

The Mobil 1 Twelve Hours of Sebring is set for 10:10 a.m. ET on Saturday. NBCSN will air the race live from 10 a.m.-3 p.m., and 6-10:30 p.m. ET; live network coverage on NBC is 3-6 p.m. TrackPass on NBC Sports Gold will offer live streaming of the full race starting at 10:05 a.m. ET. In addition, IMSA Radio will broadcast the race on IMSA.com, which also will host live timing and scoring.

The race also will air on XM channel 202 and SiriusXM Online 972.

ANTONIO GARCIA, NO. 3 MOBIL 1/SiriusXM CHEVROLET CORVETTE C8.R – GTLM POLE-WINNER: “It was a perfect lap. From yesterday, we flipped around the car a little bit. With not as much track time as in years past, qualifying is almost like practice for us, too. We gambled on something different and it seems to be working. I’m happy with that. The Corvette Racing guys did a fantastic job. It’s been an amazing season. This year I had my first pole at Petit Le Mans and today is my first pole at Sebring. I’m very, very happy for that, too. That defines how 2020 has been for us. Let’s hope we can carry on that way. The C8.R seems to be really good although I’m expecting a lot of close fights with BMW and Porsche. We are starting in the best place, so let’s see what tomorrow brings. It’s not a two-hour, 40-minute one like in July. Tomorrow will the classic race where we finish at night. We’ll see what the new Sebring date brings us.”

WHERE WERE THE GAINS FROM PRACTICE? “It was all around the racetrack. Jordan had a very similar lap here in July, so yesterday I could compare our laps to that one, even though it was almost three seconds faster than what we did yesterday. It gave me a target to know what the car was capable of. We made a big swing on the setup today, but I knew it was possible and that the C8.R could do a 1:55 around here. On the lap, the car felt fast everywhere. This is the fastest I’ve ever been around here. It was cool with zero mistakes and I just nailed it.”

DOES CLINCHING THE GTLM TITLE TAKE PRESSURE OFF FOR THIS WEEKEND? “I’ve always enjoyed this race. Since we found out about the date change, I knew that finishing at Sebring would have been very tough. Fighting for a championship at such a hard event would have been difficult. I’m glad we got it out of the way, and I hope next year we are back to a normal schedule where no one thinks about championships at Sebring! Daytona and Sebring at the beginning of the season, those are big enough races on their own. To put the championship on the line would be super stressful. For sure we will enjoy this weekend. But the rest of the cars in our class are very relaxed too. They’ll go all out to win this race. I can foresee this being an aggressive race but another classic Sebring.”

TOMMY MILNER, NO. 4 MOBIL 1/SiriusXM CHEVROLET CORVETTE C8.R – QUALIFIED FOURTH IN GTLM: “Qualifying was OK. We tried to stay the path a little bit from some of the progress we made yesterday. We just kind of missed it a little bit with the setup. The 3 car guys went in a little different direction, and on the surface it seems to be a pretty change based on Antonio’s qualifying effort. There is more data for all the engineers to look at it today and figure out what the best combination is. There’s plenty of time to do that before tomorrow. I’m excited to get to the race. Fourth and the second isn’t a bad starting spot. For us, we want to get close to the end with the car in one piece and then go racing from there. We’ve had lessons from the July race and from yesterday in practice. I think we will be in good shape.”

It has been four years since Terry Dease has raced a full season at any speedway. That will change in 2021.
Read more
Miscellaneous

After making a dramatic change to its program in the off-season, TR3 Racing is eager to go racing again in 2021 as the Florida-based team prepares for its return to the Fanatec GT World Challenge America Powered by AWS.
Read more