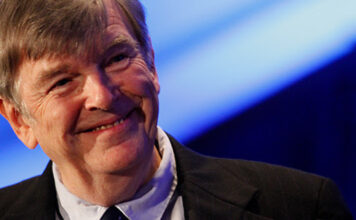 Davidson has amazed, entertained and delighted millions since he first crossed the Atlantic to visit IMS in May 1964, fulfilling a dream and his fascination with “The Greatest Spectacle in Racing” since his teenage years growing up in Salisbury, England.

Since then, Davidson has become known and respected around the globe for his preservation and promotion of the history of IMS and the Indianapolis 500. His unique blend of passion, knowledge and a genial personality is immediately apparent to all, whether through interaction with fans at the IMS Museum or the track, answering historical queries from fans and car collectors, countless public speaking engagements and his popular television and radio appearances.

During his long association with IMS and auto racing, Davidson has become one of the most well-liked and respected figures in Speedway history.

“I have been blessed with a truly amazing career which has been jam-packed with hundreds upon hundreds of personally rewarding experiences, but the years have flown by at an alarming rate and never in my wildest dreams did I ever imagine that this magical ride would last as long as it has,” Davidson said. “Over the last three or four years, I have begun contemplating other areas of my life for which I wish I had been able to spend more time, and this has only been further underscored with daily reminders during the challenging last few months of having to work from home.

“I have enjoyed an unbelievable rapport over the decades with the participants and their families, the media, my colleagues and superiors at the Indianapolis Motor Speedway, the United States Auto Club, the Speedway’s magnificent Museum and the Radio Network, and, especially, that incredibly devoted legion of the most passionate fans in the world.

“I hope that everyone will understand and respect that this basically private individual, who would really prefer to quietly take a little step back into the shadows without fanfare, has decided the time has come to retire from the official day-to-day duties.

“This was not an overnight decision, and we would like to sincerely thank the close-knit dedicated team that has been discretely working for several weeks on its implementation.”

Davidson has served as IMS historian since January 1998 and is believed to be the only person in the world to hold that role full time for a motorsports racetrack. But his involvement with the Speedway started much earlier.

He developed a passionate interest in auto racing as a teenager in England and saved enough money to come to America and make his first appearance at IMS in 1964. During that visit, Davidson dazzled members of the racing community and IMS officials, including track owner Tony Hulman, with his ability to recite year-by-year accounts of participants’ careers. Davidson also was first introduced to international audiences with a brief appearance that year on the IMS Radio Network.

Davidson then briefly joined TelX (now IMS Productions) as a historical archivist in 1997 before moving to the Indianapolis Motor Speedway Foundation as historian in January 1998.

“No one has more knowledge or more appreciation of the heritage of the Indianapolis Motor Speedway than Donald Davidson,” said Roger Penske. “I have always admired Donald’s passion and dedication to the Speedway and ‘The Greatest Spectacle in Racing.’ His ability to seemingly recall every detail of IMS history is remarkable, and he is one of the greatest storytellers racing has ever seen. I want to thank Donald for all he has done for our sport and for helping to bring the personalities and the legends of IMS to life for more than 50 years. Donald will always have a place at the Speedway, and we wish him all the best in this next chapter of his life.”

Davidson’s vast knowledge, painstaking attention to detail and friendly, polished manner led him into numerous media roles across many platforms.

He has served in many on- and off-air roles for the IMS Radio Network broadcast of the Indianapolis 500 since 1965, and he also was part of the broadcast team for selected Brickyard 400 races and other open-wheel events. From 1971-2020, Davidson was the host of the popular call-in radio show “The Talk of Gasoline Alley” on Indianapolis radio station 1070 AM.

Davidson also is a prodigious and skilled writer, with many lyrical turns of phrase and colorful anecdotes bringing IMS and racing history to life. His writing credits include scores of historical articles and columns for various print and digital outlets, Indianapolis 500 Yearbooks in 1974 and 1975, and he co-wrote with Rick Shaffer the acclaimed “Autocourse Official History of the Indianapolis 500,” published in 2006 and updated in 2013.

He also has made countless appearances on Indianapolis-area TV broadcasts and has been featured on national and international TV segments.

Over the years, Davidson also has cherished participating in speaking tours throughout the Midwest during the late winter and early spring to promote the Indianapolis 500 and share its rich history. He has spoken at venues ranging from large auditoriums to small-town public libraries, just as enthusiastic about presentations to a crowd of 12 as he was to a throng of 1,200.

But Davidson most treasures his relationships with fans, drivers, media members and officials. He has built lasting friendships with legends of the sport, such as A.J. Foyt and Mario Andretti, and its lesser lights, giving equal time and his warm personal touch to all. He patiently and humbly answers questions from legions of fans, often posing for a picture or signing an autograph if the request is in person.

“There will never be another Donald Davidson – he is like an encyclopedia on racing,” Foyt said. “I bet he knows more about my career than I do. And I don’t think he should be allowed to retire before me. All joking aside, I wish him the best.”

Said Andretti: “There is something very special about Donald Davidson, and I noticed it from almost the minute I met him. When we first met, we gravitated to each other immediately. I think that was because we were both relatively fresh immigrants from Europe, so we had something in common. But very quickly I realized how remarkable this man was – a walking encyclopedia of everything Indianapolis. He immediately started educating me about the ‘500.’ I was so impressed; the furthest thing I expected from a Brit.

“He and I personally engaged and remained connected over the years. I could ask him where I was on Lap 32 in 1971 or what the track temperature was on Race Day 1984, and he would answer me without the blink of an eye. I thought it was almost miraculous.

“He’s everyone’s go-to guy for information on anything of historical significance, and he can talk about it in the most compelling way, which has earned him tremendous respect.

“And aside from his job at the Museum, he’s a well-liked gentleman who is genuinely kind and so enjoyable to be around. I can honestly say that I looked forward to seeing him every time I returned to Indy. I have so much respect for Donald. I’m very happy that I was able to enjoy and learn from his wisdom. And what I cherish most is that we became friends. I look forward to our paths crossing again.”

In honor of his accomplishments and significant contributions to Indiana culture, Davidson was presented with the state’s highest civilian honor, the Sagamore of the Wabash, in 2016.

“Donald always has been one of a kind – a true gem,” said Tony George, board chair, Indianapolis Motor Speedway Museum board of directors. “He has parlayed his love and knowledge of the Indianapolis 500 into a unique style of storytelling, one that captivates audiences and deepens their experience of the sport they love.

“He was invaluable in creating the architecture that became the Indy Racing League and was deeply involved in plans leading up to the inaugural event at Walt Disney World Speedway. We thank him for his many contributions throughout his entire career and wish him well as he spends more time pursuing his passions, including racing and its rich history!”

Fans are encouraged to share their tributes to Davidson on social media with the hashtag #DonaldDavidson.