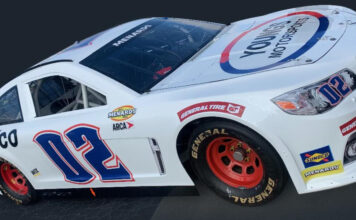 DAYTONA BEACH, Fla.: Young’s Motorsports announced today that they have expanded their organization to now include the ARCA Menards Series.

Acquiring equipment during the offseason will allow the Mooresville, N.C.-based team to offer an additional layer of development to their existing NASCAR Camping World Truck Series (NCWTS) platform.

“This is an exciting new chapter that we’re proud of,” said Young’s Motorsports principal Tyler Young.

“As we continue to crave new ways of offering more seat time to our drivers, the addition of an ARCA fleet to our Young’s Motorsports stable allows us to enter a new territory and grow with the number one goal of winning.”

As part of their growth, Young’s Motorsports plans to run a limited ARCA schedule in 2021 with a priority on the ARCA Menards Series national division with a focus on the larger track venues.

While the team has an open slot for the Lucas Oil 200 driven by General Tire race on Feb. 13, 2021, Young’s Motorsports will take the green flag in ARCA competition this weekend with two drivers.

Wright, a road-racing expert competed in the ARCA Menards Series last year on a limited basis earning three top-10s in six starts throughout the 20-race schedule. He ended the season on a high-note earning a career-best seventh-place finish at Kansas Speedway.

“I’m really excited to get back into the car, especially at Daytona,” said Wright. “We’re going to try a few driver comfort things for the test which is going to help us in February with the truck. I cannot wait to get out there on the track with the Young’s Motorsports crew.”

Joining the 26-year-old Wright is Toni Breidinger who returns to the ARCA Menards Series scene for the first time since 2018.

A 19-time USAC winner, Breidinger shifted her attention from dirt to asphalt and most recently finished fourth in the Carolina Pro Late Model Series in 2020 with DLP Motorsports.

Breidinger, a native of Hillsborough, Calif. made three ARCA starts in 2018 earning a career-best 10th place finish in her series’ debut at Madison (Wisc.) International Speedway.

Young says Young’s Motorsports a mainstay team in the NCWTS since 2012 would not be able to participate in the ARCA Menards Series without the evolving rule changes and cost-saving measures that NASCAR has put into place.

“When NASCAR purchased ARCA a couple of years ago, it was in our pipeline to compete in ARCA,” added Young. “We just had to make sure the timing was right. I feel that timing is upon us and look forward to seeing what the 2021 season delivers.”

In addition to ARCA, Young’s Motorsports will also field multiple entries in the NASCAR Camping World Truck Series this season. Currently, Wright joins Spencer Boyd who returns to Young’s Motorsports for a third season as driver of the No. 20 Chevrolet Silverado.

Additional announcements from Young’s Motorsports on their 2021 lineup is forthcoming.

Official Release
Previous articleGrand Marshal, Honorary Starter Named for Rolex 24 At DAYTONA
Next articleBest way to fund your next car

Gray earned the second starting position by virtue of his fastest lap time from practice. He led the opening seven laps before falling back to second and holding that position until a caution on lap 55.
Read more
ARCA

Rette Jones Racing development driver Max Gutiérrez is still gleaming after picking up a thrilling victory in the Jeep Beach 175 at New Smyrna (Fla.) Speedway, but the ARCA Menards Series East rookie driver knows once he puts on his helmet this weekend at Five Flags (Fla.) Speedway, it will be time to put the joyous emotions aside and concentrate.
Read more