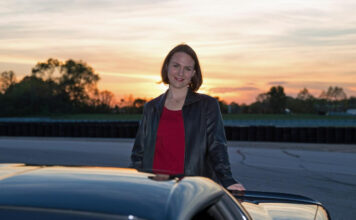 DETROIT (Jan. 19, 2021) – Chevrolet has named Laura Wontrop Klauser as its newly created Sports Car Racing Program Manager as the manufacturer continues its shift toward an engineering-based approach throughout its motorsports programs.

Klauser, who resides in Detroit, moves into the role which includes engineering and technical oversight of Corvette Racing on behalf of Chevrolet. Already she manages the Cadillac DPi-V.R and Camaro GT4.R programs in the IMSA WeatherTech SportsCar Championship. The goal is to expand the level of engineering and technical direction for Corvette Racing as it sets a course for its future with the mid-engine Chevrolet Corvette C8.R, along with all the Chevrolet road-racing programs.

“It’s a huge honor to move into this role with Corvette Racing,” said Klauser, who has been part of General Motors’ racing activities for the last five years. “It unquestionably is one of the premier programs in all of sports car endurance racing. The rich history of Corvette’s successes in IMSA is something of which everyone at Chevrolet can be proud. At the same time, this motorsports management restructure is a great opportunity to rethink how Chevrolet operates on IMSA weekends. My goal is to promote more synergy between our racing programs and funnel our technical learnings back to GM so we continue to make and sell better cars to our fans and customers around the world.”

Klauser earned a Bachelor’s Degree in Mechanical Engineering and a Master’s in Engineering. She began at General Motors in 2008 and spent eight years on the production side of the business including advanced design work on the Corvette C7. Motorsports competition came calling in 2016 after stints on the Cadillac CT6 and Chevrolet Cruze and Spark production teams. She was named Program Manager for the Cadillac ATS-V.R effort in Pirelli World Challenge.

Corvette Racing has spent the last 22 years building its championship pedigree with 14 Team titles along with 13 Manufacturers and Drivers championships. Antonio Garcia and Jordan Taylor are coming off a GT Le Mans title-winning season in which they won five times and drove the C8.R to its first victory in July at Daytona.

Klauser also is heavily involved with SAE. A past participant the student level, she remains an active member and volunteer for the FSAE program as Dynamic Events Coordinator for the Michigan Competition. She has served on the SAE Detroit Section Board since 2011 holding the Chair position for 2018.

She also is a familiar face to the Corvette customer and enthusiast community. Klauser has participated as a Corvette Team representative at the National Corvette Museum Birthday Bash’s Ladies Garage and Corvettes at Carlisle events annually. She also participates in track days driving her 2013 Corvette Grand Sport.

“We are pleased to have someone as enthusiastic and experienced as Laura as our Sports Car Racing Program Manager,” said Mark Stielow, Chevrolet Director of Motorsports Competition Engineering. “Corvette Racing and GM’s road-racing efforts will benefit from her engineering experience with both the Corvette and Cadillac production cars, and her relationship with a large number of our fans and Corvette owners.”

The IMSA WeatherTech SportsCar Championship will open its 2021 season with the Roar Before the 24 from Jan. 22-24 and the Rolex 24 At Daytona on Jan. 30-31, which will air beginning at 3:30 p.m. ET on Saturday, January 30 across NBC, NBCSN, TrackPass and the NBC Sports App. A 100-minute qualifying race from the Roar will air on TrackPass at 2 p.m. ET on Sunday, Jan. 24 and again same-day at 4:30 p.m. ET on NBCSN. IMSA Radio will air full qualifying and race coverage at IMSA.com.

General Motors (NYSE:GM) is a global company focused on advancing an all-electric future that is inclusive and accessible to all. At the heart of this strategy is the Ultium battery platform, which powers everything from mass-market to high-performance vehicles. General Motors, its subsidiaries and its joint venture entities sell vehicles under the Chevrolet, Buick, GMC, Cadillac, Baojun and Wuling brands. More information on the company and its subsidiaries, including OnStar, a global leader in vehicle safety and security services, can be found at .