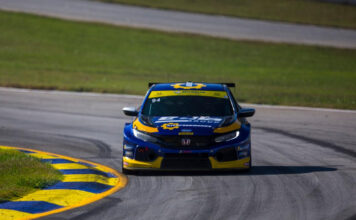 Both Eversley and Strelzoff have had success in IMSA Michelin Pilot Challenge competition. Eversley is a multiple IMSA podium finisher and has most often been behind the wheel of a Honda and Acura over the past five seasons. Strelzoff has been away from the IMSA paddock since 2016 but earned six podium finishes in the ST class during the 2013 to 2016 seasons.

Eversley is hoping to build on a streak of two consecutive seasons on the Pilot Challenge TCR podium, with appearances at Sebring in 2019 and Mid-Ohio Sports Car Course in 2020. Eversley remains a factory driver for Honda, where he has won races and championship in TCR and GT3 machinery.

“I’m pleased to be joining Atlanta Speedwerks for 2021 and since I’m from Atlanta myself, I think it’s a perfect fit!” Eversley said. “Greg and I have known each other for several years and battled in the ST class quite a bit so I think we will gel pretty quickly. We’re both extremely motivated to get the No. 94 Honda Civic TCR on the top step of the podium and, based on the performance of this team had last year, I think we’ll be strong.”

Strelzoff has been away from the IMSA paddock for a handful of seasons, making his last start in 2016. He’ll make his TCR debut during the Roar Before the Rolex 24 test weekend, January 22-24.

“My goal for this year is to win,” Strelzoff said. “It’s the only thing I didn’t do in the previous years. I am excited to try the new TCR cars, and definitely to open for such a well-known and respected driver in Ryan. I hope I can turn the car over in good condition and position for Ryan to get us on the podium.”

Atlanta Speedwerks enters the 2021 season with championship goals, following a select-event season in 2020 with a pole position and podium finish at Michelin Raceway Road Atlanta and a fifth-place finish in the Team Championship in a full-season 2019 effort. Henderson and 16-year-old Noaker will pilot the No. 84 Sabelt/Pagid Honda Civic TCR alongside the No. 94 Dinner With Racers/Lemons of Love Honda Civic TCR of Eversley and Strelzoff, with a third Atlanta Speedwerks car still in the works.

“Between our drivers and our crew members, this is the most experienced that Atlanta Speedwerks has been entering a season,” Team owner and veteran driver Todd Lamb said. “Jonathan Braswell and Jason Hoover will serve as car engineers, and we’ve added Rob Baker as Team Manager with his multi-car experience in IMSA. It’s all with the goal of putting together a talented crew that can help us win races and perhaps a championship. We’ll need everyone to bring their ‘A’ game to the track to do that.”

The 2021 season opens with a four-hour race at Daytona International Speedway on the Rolex 24 At Daytona weekend, January 27-29.