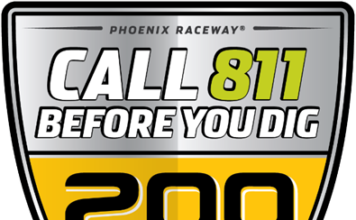 PHOENIX (February 23, 2021) – Phoenix Raceway today announced that Arizona 811 will serve as the title sponsor for the upcoming NASCAR Xfinity Series race on Saturday, March 13. The green flag for the Call 811 Before You Dig 200 presented by Arizona 811 is set for 3:30 p.m. MT.

“Arizona 811 has been a great partner of ours for many years and we’re excited they’ve chosen to expand that relationship to become the entitlement sponsor for one of our two annual NASCAR Xfinity Series races,” said Phoenix Raceway President Julie Giese. “We’re proud to have the opportunity to work with Arizona 811 and we can’t wait to see the stars of the Xfinity Series take to the track in the Call 811 Before You Dig 200.”

“As a promotional partner, Arizona 811 looks forward to educating the public about the need to ‘Know What’s Below’ by calling 811 or clicking Arizona811.com at least two working days before any digging project to learn the approximate location of buried lines in the area,” said Sandra Holmes, executive director of Arizona 811.  “Doing so can help prevent injuries, property damage and damage to underground utilities, as well as inconvenient outages to services we all rely on every day.” For more information on safe digging in Arizona, please visit Arizona811.com.

“I am honored to represent the state of Arizona and take part in educating others in excavation safety,” said Brice Box, chairperson for Arizona 811’s Education and Awareness Committee.  “We invite everyone to join us in this effort by following us on Social Media @Arizona811; like, share, and become an #AZ811PARTNER. Stay safe, stay healthy, dig smart and let’s go racing!”

A limited number reserved tables remain in Phoenix Raceway’s INfield Hub for the Call 811 Before You Dig 200 presented by Arizona 811 on Saturday, March 13. Fans looking to lock in their access for the NASCAR Xfinity Series race may do so by visiting PhoenixRaceway.com, by phone at 866-408-RACE, or in person at the Phoenix Raceway ticket office during regular business hours.

Arizona 811 was established as a nonprofit communication center in 1974 with a mission to perform excavation notification services and stakeholder education that promote the safety and welfare of the community by protecting underground facilities from damage. Services are available statewide at no cost to anybody digging.For more information, visit www.Arizona811.com.