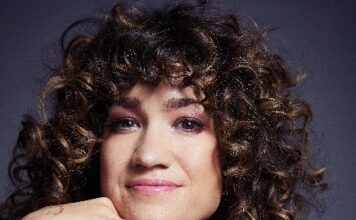 Actress/Singer and two-time Tony nominee to perform from her home ahead of Homestead-Miami Speedway NASCAR Cup Series event This Sunday, Feb. 28

HOMESTEAD, Fla (February 23rd, 2021) – As NASCAR fans around the globe continue to dive into Netflix’s new racing-themed comedy series, The Crew, fans of the show will have an opportunity to see one of its lead actresses showcase her singing talent ahead of this Sunday’s Dixie Vodka 400 from Homestead-Miami Speedway (3:00 PM ET, FOX).

Stiles, a multi-talented actress, musician, and two-time Tony Award nominee, can currently be seen starring as ‘Beth’ in The Crew alongside Kevin James.

On television, Sarah also recurs as ‘Bonnie Barella’ on Showtime’s hit series BILLIONS and starred in EPIX’s critically acclaimed series GET SHORTY. Additional television and film credits include the Steven Soderbergh’s UNSANE, I’M DYING UP HERE, BLACKLIST, DIETLAND, as well as the animated STEVEN UNIVERSE for Cartoon Network and SUNNY DAY for Nickelodeon. Sarah lends her voice on the recording of Pasek and Paul’s JAMES AND THE GIANT PEACH.

On stage, Sarah Stiles starred in the Broadway production of TOOTSIE as ‘Sandy Lester’. She earned Tony, Outer Critics Circle, and Drama Desk Award nominations for Outstanding Featured Actress in a Musical for this role. She has also starred in various Broadway productions including her Tony nominated performance as Jessica in HAND TO GOD, ON A CLEAR DAY YOU CAN SEE FOREEVER, Kate/ Lucy AVENUE Q and THE 25th ANNUAL PUTNUM COUNTY SPELLING BEE.

In 2016, she penned her solo show SQUIRREL HEART which she performed to sold out audiences at Joe’s Pub at the Public in NYC. Her debut EP YOU CAN UKELELE WITH ME was released by Broadway Records in August 2020.

Fans seeking ticket options for both days, as well as learning all safety protocol guidelines for the weekend, can visit www.HomesteadMiamiSpeedway.com or call 866-409-RACE (7223). Kids 12 and under are free for the Contender Boats 250 with the purchase of an adult ticket. Only a limited number of fans will be in attendance for both the Contender Boats 250 and the Dixie Vodka 400.

I’ve been happy with the start of the year. I feel like for the most part, or partially, we’ve kind of contended for a win in a way each week. So that’s been good. A top 10 at the 500 is always good.
Read more
NASCAR Cup PR

We meet on Tuesdays in the morning and mostly talk about the upcoming week. We’ll talk about the previous week if we have anything major, but most of that stuff is talked about Sunday or Monday.
Read more
NASCAR Cup PR

Michael McDowell, driver of the No. 34 Love’s Travel Stop Ford Mustang in the NASCAR Cup Series, goes into this weekend’s race at Las Vegas Motor Speedway fourth in the point standings.
Read more