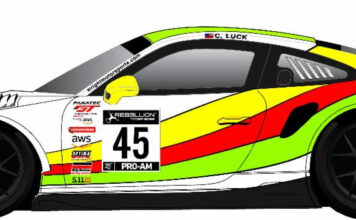 BATAVIA, Ohio. (February 23, 2021) – The SRO America 2021 season begins in less than two weeks, and Porsche racing team Wright Motorsports will contest two cars in the Fanatec GT World Challenge America powered by AWS and GT America powered by AWS series. Fred Poordad, the 2020 Am class champion, is returning to the series in the No. 20 Porsche 911 GT3 R, progressing up to the Pro/Am class with Jan Heylen. Charlie Luck is returning for his fifth year with the Ohio-based team, advancing from the IMSA Porsche GT3 Cup Challenge USA to the new GT America series, racing the No. 45 Porsche 911 GT3 R.

“It is great to be back for another year in SRO America,” said team owner John Wright. “I’m proud of both Fred and Charlie for wanting to challenge themselves and continue their driver development with us. This will be an exciting season, and I can’t wait to get it started.”

After dominating the GT World Challenge America Am championship with Max Root, Dr. Fred Poordad will continue his driver development path by stepping into the next class, racing in Pro/Am with driver Jan Heylen in the No. 20 Porsche 911 GT3 R. Poordad and Root swept the Am class in 2020, earning nine podiums and seven wins together. The No. 20 Porsche had an impressive year, finishing on the overall podium beating out Pro/Am lineups on four occasions. Poordad, with co-drivers Max Root and Jan Heylen, ended the season on a high note, earning top honors in the Silver Cup class in the Intercontinental GT Indianapolis 8 Hour.

“Following an interesting 2020 season with so many national and international distractions, as well as many eventful race weekends, the season ended on a positive note for the No. 20 Wright Motorsports Entry, winning the Am Championship,” said Poordad. “After what seemed like a short off season, which I spent resting and rehabilitating some nagging injuries, I am excited to enter the No. 20 car in the Pro/Am group, driving alongside Jan Heylen. I look forward to the hard work and challenges, as the 2021 season promises to be a competitive one in GT world challenge.”

“It’s great to be back in SRO America,” said Heylen. “I love the SprintX formation and the hard battles that come along with it. I’m excited to be back in the car with Fred after a strong end of the season last year at Indianapolis Motor Speedway. I believe we have a strong package with Fred, Wright Motorsport, and Porsche that will put us in a position to fight for the championship. Pre-season testing has been very promising, and I can’t wait to get to Sonoma to get the season started.”

The 2021 GT World Challenge America championship will continue with the SprintX format: two 90-minute races each weekend with the driving responsibilities to be shared by a pair of drivers. The calendar will feature six double headers across North America’s most iconic courses with a one-race season finale at the Indianapolis 8 Hour. The level of competition across the field will rise this year, with the return of the Pro/Pro class back in the series to join the Pro/Am and Am/Am lineups.

Exciting new challenges lie ahead for Wright Motorsports driver Charlie Luck, who will advance from the Porsche GT3 Cup Challenge USA by Yokohama to SRO America’s new GT America powered by AWS. Coming from a single-make Porsche series, the level of competition will dramatically broaden for Luck and the No. 45 Porsche 911 GT3 R in 2021. Created as a training ground for FIA Bronze-rated drivers, GT America powered by AWS series will feature GT3 and GT4-spec machinery from at least seven different automotive manufacturers.

“I’ve completed four seasons of the Porsche GT3 Cup Challenge USA by Yokohama, and I had a great experience,” said Luck. “I’ve been fortunate to finish second in the points in two of the three years I was in the Platinum class, and I was ready for the next challenge. The last thing you want to do is change classes, then only have three or four people to compete against. GT America was really appealing to me in that there would be Bronze and Masters Bronze drivers.”

The 2021 calendar will feature seven double header weekends, running in support of the GT World Challenge America. Similar to the Cup series, the format will feature a single-driver running two 40-minute races each weekend, visiting many of the iconic tracks that Luck has previously raced at in the IMSA series. Additions to the 2021 calendar that will be new to Luck will be the downtown streets of Nashville, Tennessee for the Music City Grand Prix, and Indianapolis Motor Speedway.

Luck’s advancement into the GT America series feeds into his aspirations of participating in other challenges, like endurance racing.

“My hope is to get comfortable and competent in the GT3 R, and potentially consider an endurance race or two towards the end of the year, depending on how the season progresses,” said Luck. “We know which cars will be on the grid this year, but we don’t know the names of all the competitors yet. There are always people you can trust to race close with, and when you enter into a new series, you have to figure out the competition. I look forward this new season.”

Both the GT World Challenge America and GT America championships will kick off their 2021 season March 5-7 at Sonoma Raceway. The week will begin with unofficial testing sessions before official practice, qualifying, and race sessions take place on Saturday, March 6 and Sunday, March 7. All races will stream live on youtube.com/GTworld. For full schedule information, visit sro-america.com.

It has been four years since Terry Dease has raced a full season at any speedway. That will change in 2021.
Read more
Miscellaneous

After making a dramatic change to its program in the off-season, TR3 Racing is eager to go racing again in 2021 as the Florida-based team prepares for its return to the Fanatec GT World Challenge America Powered by AWS.
Read more